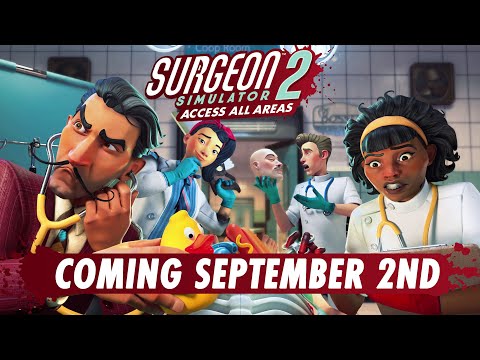 How do you make a sequel to one of the first viral video games? Surgeon Simulator was conceived in just 48 hours, with a limited fixed viewpoint and deliberately obtuse controls that made you as likely to inject yourself with a sedative as you were to pick up the hacksaw you actually wanted. As amusing as it was to play, many found it just as funny watching others grapple with its quirky challenges, becoming one of the first breakout Twitch sensations.

Following up such a success with a meaningful sequel is an unenviable task, but Bossa has managed to do just that. Surgeon Simulator 2 does a surprisingly good job of broadening the scope from this silly, singular game concept, while managing to retain a lot of the original spirit.

The most significant change is that you now have full locomotion to up and run around entire levels, coming up to the Bob you’re surgeoning at from any direction, but the way you interact with this world is still done with the hand at the end of an arm that’s sticking out like an elephant’s trunk. You have a surprising degree of control over this arm, able to position it in 3D space, rotate the hand, and even pull off some rude gestures.

The factor you have to contend with is that, while the vast majority of humans are able to do all manner of complex motions all at once together at the same time. In Surgeon Simulator 2, you’re having to try and do each individual rotation and positioning action separately – something I find much easier playing with mouse & keyboard on PC than with a controller on Xbox, even with a relatively straightforward layout. You will awkwardly pick up a hammer, walk over to Bob’s rib cage, carefully angle yourself for the right hit impact point, and then wildly swing your entire upper body, pivoting from the base of your spine in order to crack those ribs. You will almost certainly miss.

Much of the comedy of working through the story mode of Surgeon Simulator 2 still comes from the wild mishaps and unintentional amusement you’ll find while playing. Organs will go flying across the room, you’ll accidentally bop a leg off – Bob’s extremities are just waiting to be plucked like overripe fruits – and as he’s rapidly bleeding out, you’ll race across to grab the syringes to stop the bleeding and top him up, having temporarily attached an arm where his head is meant to go to stop the bleeding There’s a nice story that runs through all of this, telling the weird and wonderful tale of a surgery training startup that’s gone very weird and very wrong. There’s certainly more than a few hints of Portal to the tale they tell, as you break out of the barely functioning training rooms and into secret labs to uncover what’s really going on. Invariably, you’ll have to figure out how to perform some kind of surgery amidst some quirky environmental puzzles.

The problem is that you can find moments of frustration just as often as you’ll find fun. Surgeon Simulator 2 can be fun in part because of the obtuse controls, but they quite quickly become an element that you’re simply fighting to overcome as you try to get through a level. That’s especially when you have to deal with physics objects, like trying to stack barrels so you can jump up them and to reach a vent, or just want to slot an oversized fuse into its slot with any kind of reliability. The surgery itself also takes a bit of a back seat at times, as simply another tool in the box of puzzling tricks. Not having a fixed view to work from has necessarily made things more simplistic, removing some of the more technical surgical challenges. There’s no brain surgery, for example – you just rip off Bob’s head and quickly slap on a new one. You can share the highs and lows of this with friends, with support for up to four players, and as with pretty much every video game experience out there, that fact can really amplify the game’s humorous strengths as you puzzle your way through each level. It also helps being able to vent when things don’t quite go to plan.

For the Steam and Xbox release, the biggest addition is the new competitive multiplayer support and the Free For All matchmaking which pits you against rival wannabe surgeons in a string of weird and unusual games. Instead of having you in a race against the clock to complete a particular transplant, these are much lighter tasks, having you rip out a particular assortment of limbs or organs from a Bob, moving around a grid to chase the lights on a dot matrix in front of you, or flinging Bob heads like you’re throwing coconuts at a county fair. If you want, you can wander over and start to mess around and interfere with your rivals. At this point in time, the multiplayer matchmaking feels a bit off. Bossa has noted that resolving server issues is one of their top priorities, and we’ve often found either no players at all or got stuck in the loading screen. Even when you do get one or two opponents, you’re typically going to be going up against people that really don’t seem to know what they’re doing (though that could just be the way characters in this game run around so gormlessly), and the whole things soon starts to feel like a minor distraction rather than a meaty new game mode. This is a game that’s meant to be played with friends, so matchmaking in silence just doesn’t have the same feel.

There’s also the rather impressive and extensive creation tools for wannabe level builders. You have all the logic tools needed to create something to the same standard as Bossa, doing so from a first person view point. There’s a steady trickle of creations to browse, but as with so many user generated content games, there’s a fair bit of cruft that’s being uploaded as well.