Tails Of Iron PS5 review. A literal world away from the more leisurely and slow paced beats of Odd Bug Studio’s first game, PSVR exclusive effort The Lost Bear, Tails of Iron is instead a much more violent and action filled affair that has more in common with Dark Souls than perhaps anything else. As the diminutive rat prince Redgi, the youngest and seemingly weakest heir apparent to the Rat Throne, Tails of Iron has players embarking on an ultraviolent odyssey to restore his broken Kingdom, slaughtering their way through the nefarious Frog Clan until they reach Greenwart, the amoral architect of the Rat Kingdom’s downfall.

Indeed, things kick off in quite the measured fashion. With our hero waking up from his rat-nap, he saunters around the castle chatting to his friends and relatives (all the characters in this game vocalise their speech as an adorable mixture of instruments such as flutes and more), before a quick set of tutorials show you the ropes of the combat system and then send you right into the fray as the Frog Clan basically murder all of his family in fairly graphic fashion. Make no mistake – Tails of Iron is not a game for the young un’s.

With the action playing out from a two dimensional, side-on perspective, Tails of Iron has players controlling the frankly adorable Redgi as he leaps, loots and carves his way through a legion of really quite hostile frogs and other nasty folk, rescuing his scattered loved ones and fulfilling his self-made prophecy to get vengeance for everything and everyone he has lost. A quaint and wholesome tale (tail?) this is not. 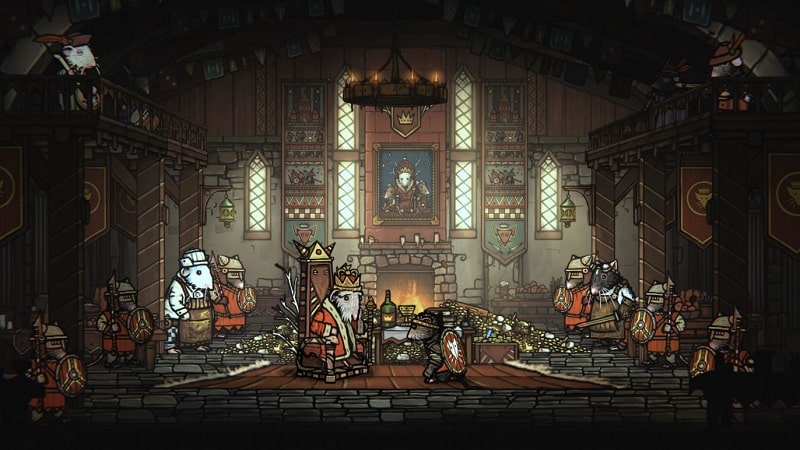 Certainly, it doesn’t take long for Tails of Iron hugely attractive visual presentation to bore its way through your eyeholes and capture your imagination. Though Tails of Iron boasts a notable visual kinship with the studio’s first title, echoing the hand-painted craftwork veneer that served The Lost Bear so well as a fantastical fairy-tale come to life, there are a myriad of smaller more intimate details too.

From the idle twitching of Redgi’s whiskers to the swishing of his tail and the adorable art style which in many ways magnifies the brutality which serves as the touchstone for Tales of Iron, it’s clear that Odd Bug Studio’s latest is quite the stylish looking offering. As such, it should probably come as no surprise that such lavish detail on Redgi and his fellow rat-folk is owed in part to the developer’s fondness for his own pet rats, resulting in a far more evocative depiction of these little furry folk than we might otherwise reasonably expect.

In terms of how it all plays, Tails of Iron has you wandering the remnants of the Rat Kingdom as Redgi, taking on quests, side-quests, collecting new gear and laying waste to your enemies. While exploring the Rat Kingdom and beyond is something of a palpable thrill thanks to the gorgeous visuals, it’s really in the combat that Tails of Iron truly shines – and also where the comparisons to Hidetaka Miyazaki’s Dark Souls are most keenly felt. 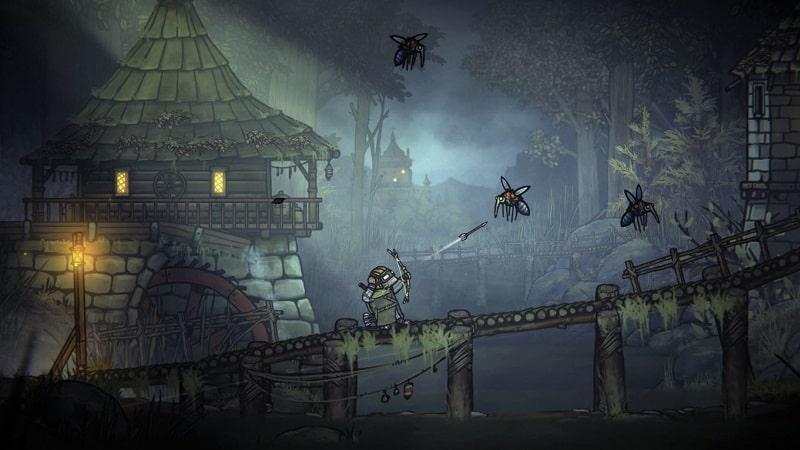 Much like Dark Souls then, combat in Tails of Iron is often a quick and brutal affair where timing and knowledge of enemy attack patterns will see you through to victory. Indeed, with practically every enemy in the game capable of inflicting substantial amounts of damage at any one time, evasion and parrying also become a primary concern and must be mastered accordingly.

The UI helps with this too – red attacks are unblockable and must be evaded (often upon pain of death), while yellow attacks are special strikes that can only be parried; the former allowing you some much needed breathing space, while the latter results in your foe being stunning for a second or two, enabling Redgi to slip some strikes in.

Where things get trickier is in how developer Odd Bug Studio leverages the two dimensional perspective of Tails of Iron in a neat way. Because our plucky little hero can only fight along a single axis and is often confronted by multiple enemies at once, fights later on in the game can often prove to extremely challenging as you find yourself having to take stock of every enemy on screen, their unique movement and attack patterns, lest death come to poor little Redgi extremely swiftly. 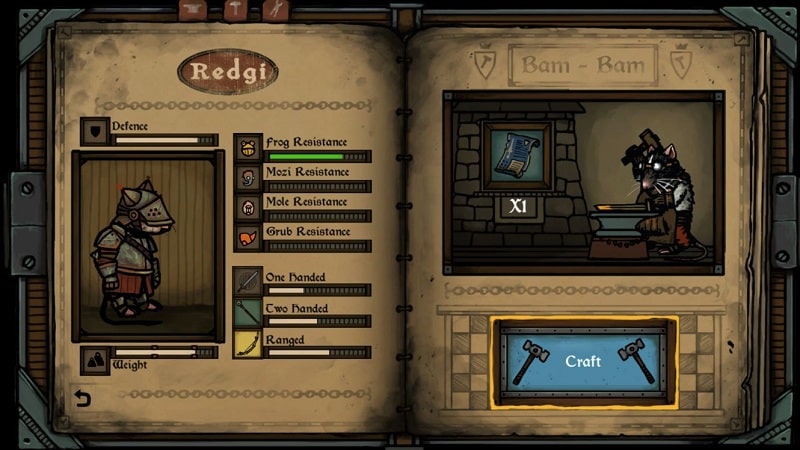 The combat system is even deeper still thanks to the various weapons and armor types that you can obtain, too. Not only do different weapons boast varying amounts of range and damage potential, but Redgi can also equip light, medium and heavy armor that provide increasingly high levels of protection for correspondingly deep trade-offs in manoeuvrability.

And this is the thing, Tails of Iron provides an admirable amount of freedom as to the sort of playstyle you wish to embrace – you can go in light, with thinner armor and less damaging, but faster weapons, or, you can go full tank at the expense of that all-important movement. Additionally, some armor types boast better resistances against certain types of enemies than others, so it always pays to equip yourself accordingly.

Thankfully, Redgi can also drink a flask of freely refillable bug juice to restore his health – though doing so in the middle of combat leaves him expose, meaning you need to time your draughts perfectly. Elsewhere, our long-tailed hero can also use a variety of ranged bows and firearms, craft new weapons and gear with looted materials and blueprints, while a range of side-quests allow Redgi access to special ingredients that can be taken back to his culinary minded brother (once he’s been rescued) to rustle up a health boosting feast. 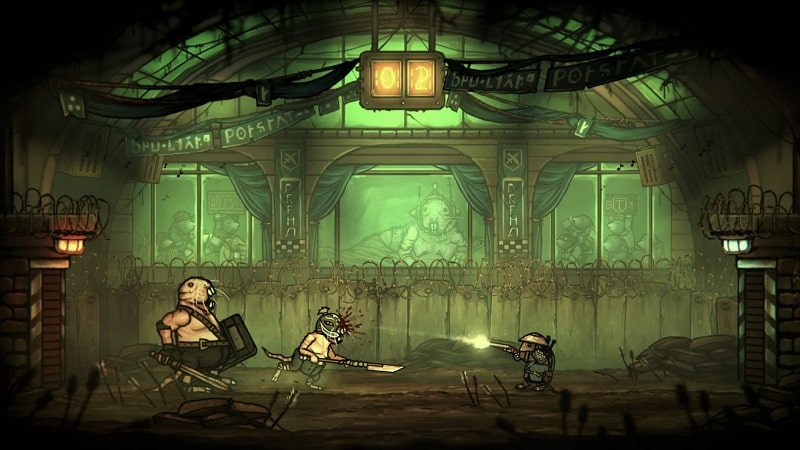 Continuing the similarities to Dark Souls, the bosses in Tails of Iron represent a towering challenge. A compounded mixture of multiple attack patterns, regular enemies and unexpected attacks, these punishing fiends are a full test of reflexes, enemy pattern knowledge and progression. Though you’ll die often, much like Miyazaki’s opus the feeling of satisfaction when you fell one of these elite foes borders on euphoric and is extremely rewarding – not least thanks to the ultraviolent fatalities that Redgi inflicts on his enemies. We’re not quite talking Mortal Kombat levels of splatter here, but let’s just say that little Redgi knows his way around an impaling and dismemberment or two and leave it at that.

Unfortunately where Tails of Iron trips over its own paws somewhat is in regards to the inventory system. Basically, you cannot have more than one instance of weapons or armor on your person. Instead, when you encounter new gear you get the option to equip it or send it to storage. The problem is, if you accidentally send your newly found loot to storage, the only way to reverse that situation is to reload a save or make the trek to an item storage chest. It’s a touch frustrating, certainly.

Though Odd Bug Studio’s latest might not be especially innovative and inventory design mishaps aside, Tails of Iron is handsomely made, eminently enjoyable action RPG with a brutalist streak and deeply enjoyable combat system that recalls the deadly preciseness of the Dark Souls games. Fans of grimdark fairy-tales and action RPGs with great combat will find much to love here.