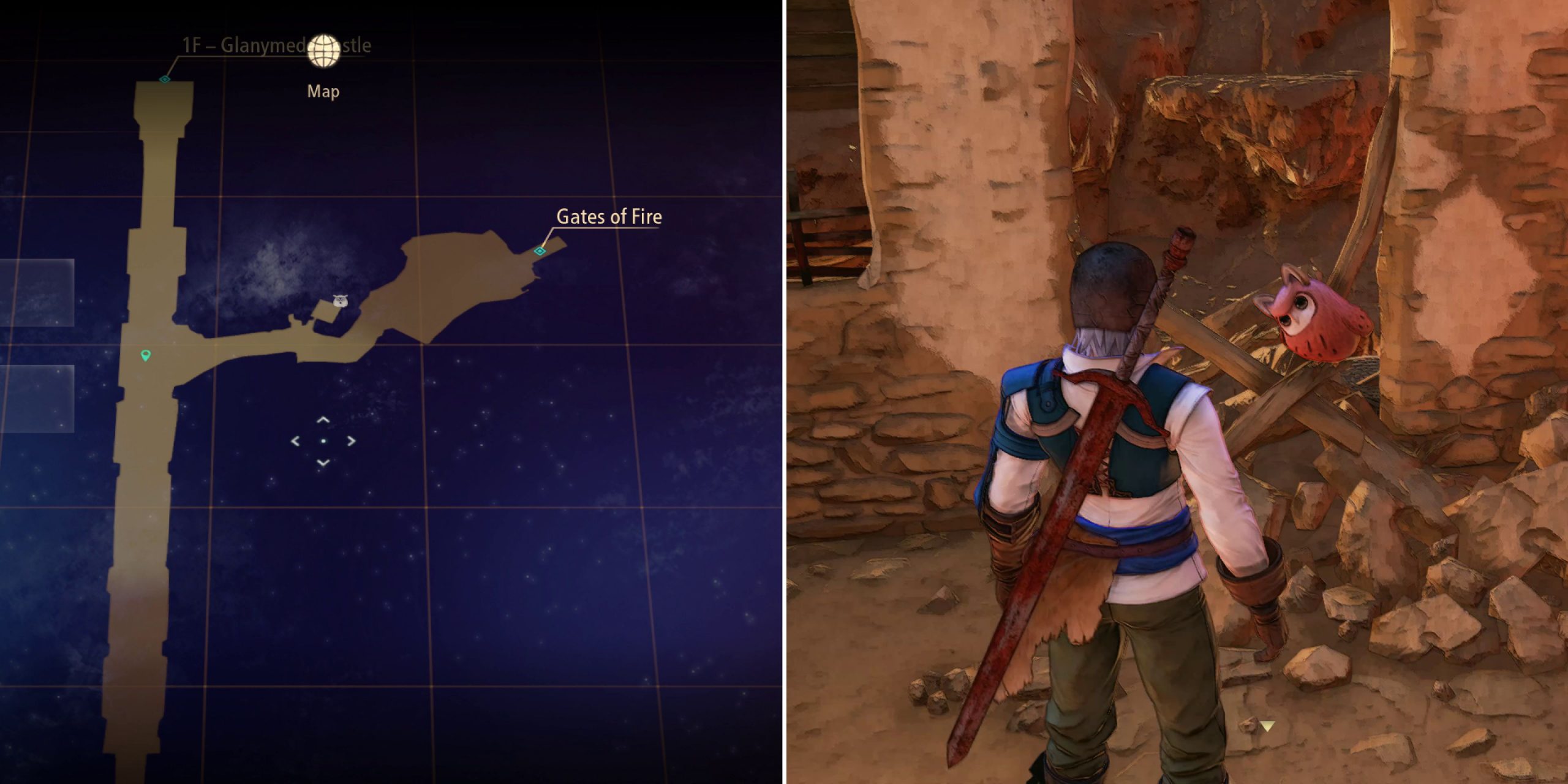 Tales of Arise sees players exploring numerous realms, each of which is ruled over by a tyrannous Renan Lord. The story begins in Calaglia, which, for the most part, serves as one long tutorial section full of combat tips and scene-setting lore. After getting their bearings and learning a little more about the plight of the Dahnans, players must make their way to Glanymede Castle to overthrow the realm’s power-hungry ruler, Balseph.

RELATED: The Best & Worst Things About Tales Of Arise

Compared to some of the later areas in Tales of Arise, Glanymede Castle is fairly linear, which makes navigating its fiery halls a relatively simple task. That said, there are plenty of useful items scattered around the castle, not to mention a couple of hidden owls and a powerful Gigant Zeugle mini-boss. Assuming players know what they’re doing though and are at a decent level (7+), neither the Zeugle, nor the mighty Balseph should cause them too many problems.

Unfortunately, gaining access to the castle through the main entrance isn’t an option at this time, so players will instead need to sneak in through a service entrance round back. To do so, they should take a right, being sure to stop off in the little building on their left in order to find one of Calaglia’s many owls.

After reaching the Gates of Fire area, players will then need to follow the train tracks round to the left before climbing down a ladder on their left to reach a metal gantry. There’s a pipe that can be crossed here, which will take players straight to the service entrance. It’s all very linear, so getting lost isn’t really possible in this area.

Upon entering the castle, there’ll be a short cutscene in which Shionne tells Iron Mask to take the Blazing Sword. The following tutorial battle explains the sword’s mechanics, which allow Iron Mask to imbue his Mystic Artes with flames by sacrificing some of his HP. Players will also be introduced to devastating multi-party member attacks known as Boost Strikes at this point, which can be used by pressing the D-Pad once a large enough attack chain has been built up.

After completing the tutorial and defeating the Swordsman, players will need to use the Blazing Sword to absorb a wall of flames at the expense of 8 CP. After doing so, they can either fight their way through the enemies in front of them or follow the path round to the right and remove another flame wall for 16 CP.

There’ll be some wolves in the next area, although these can be easily avoided if players don’t feel like fighting. There’s also some Apple Gel among the debris near the out-of-order elevator, but, assuming players are well stocked up, they can ignore this for now and take the passageway up to the second floor, which is near the spot where the wolves are hanging out.

Taking a right at the beginning of the second floor will lead to a box containing some Scrap Meat and another 16 CP wall of flames. Behind the flames is a red chest containing a set of Bone Fragment Armor, which should offer a nice improvement over Iron Mask’s Ocean Blue Battle Garb.

After equipping their new armor, players should head back the way they came and continue to follow the path around. There’s an area on the left with a blue crystal containing Almandine Mass, followed shortly by another 16 CP wall of flames. Clearing it will lead to a red chest containing a Warrior Emblem, which can be equipped to increase a party member’s strength by 15.

There are some Bees buzzing around near the entrance to the third floor, though, like the wolves earlier, these can be avoided fairly easily. Those who want to collect the Apple Gel near the pile of debris will probably need to fight them though, but, given their low level, they shouldn’t cause too many issues.

Upon reaching the third floor, Iron Mask will notice a soldier shouting at a small child which leads to yet another battle. Thankfully, it’s quite an easy one, with the lone Swordsman not putting up too much of a fight. Defeating him will reward players with the Savage Key, which is needed to operate the special elevator that leads to the castle’s upper floors.

There are some more side rooms on this floor, in which players can find several Orange and Apple Gels and a blue chest containing some Life Bottles. There’s also an owl hiding out with some chickens in the one to the right of the elevator. The Castle Elevator Key is on a bookshelf in the final set of side rooms, which players will have to pass the stairs leading up to the next floor in order to reach.

The next floor contains a level 13 Toxidillo, which serves as one of the game’s many Gigant Zeugles, though whether or not players take it on at this time is entirely optional. It’s probably worth doing though, as players will receive an Astral Flower after defeating it, which will increase the party’s maximum CP by 10.

Providing players steer clear of its poison plumes and are able to dodge its bounce and roll attacks, the Toxidillo shouldn’t cause too much trouble. It may be worth restoring some CP with Orange Gels before the battle, however, as the party will probably be running low right now due to the numerous flame walls they’ve had to remove.

After passing the area with the Toxidillo, players will find a room containing a blue chest. Inside are two Astral Crystal Grains, which are needed to forge Iron Mask’s Crude Sword and Shionne’s Basic Rifle. Following the main path to the very end will lead to another flame wall, behind which is another red chest containing the Garnet accessory.

There are also a few more blue crystals on this floor, though neither provides anything that can’t be found elsewhere. Once they’re ready, players should make their way to the fancy-looking elevator, and, after taking out the two soldiers that are guarding it, use the Savage Key to gain access to the castle’s upper floors.

There’s not much to do in the next area other than following the stairs upwards, though players should be sure to interact with the healing light that’s found just before the final staircase. It’s also worth equipping the Garnet at this time, as the reduced fire damage will come in pretty useful in the upcoming boss fight with Balseph.

The first part of the fight with Balseph is actually pretty straightforward, though some of his attacks have incredible range thanks to the sheer size of his weapon. He’ll often swing his ax twice consecutively too, so players will need to be ready to dodge at a moment’s notice or risk taking some pretty hefty damage.

At various points throughout the fight, players will be able to perform Special Boost Strikes, which will shave a decent amount from Balseph’s health bar and incapacitate him for a short while. It’s in these moments that players should hit him with everything they have, which will quickly bring his health bar down.

After reaching 50% health, Balseph flees to the roof, where a giant fire avatar will suddenly show up. Though it is possible to hit the flaming beast, defeating it is not, so players should continue to focus their attention on Balseph; dodging the fire avatar’s attacks whenever they’re prompted to do so.

Balseph’s attacks are a bit more powerful during this phase, although it’s fairly easy to tell when he’s winding up for a big one and thus they aren’t all that difficult to dodge. When he starts preparing to use Pyroclasm though, players should get as far away as possible.

Once players have depleted Balseph’s health bar, they can sit back and enjoy a couple of impressive-looking cutscenes. When they next gain control, they’ll find themselves back in Ulzebeck, where they’ll learn a little bit more about Iron Mask’s mysterious past. There’s not too much time for reminiscing, however, as with Calaglia now free from Balseph’s tyranny, it’s time to move on to the next evil Lord and the frozen wastelands of Cyslodia.

MORE: Tales of Arise: How to Change Characters in Battle