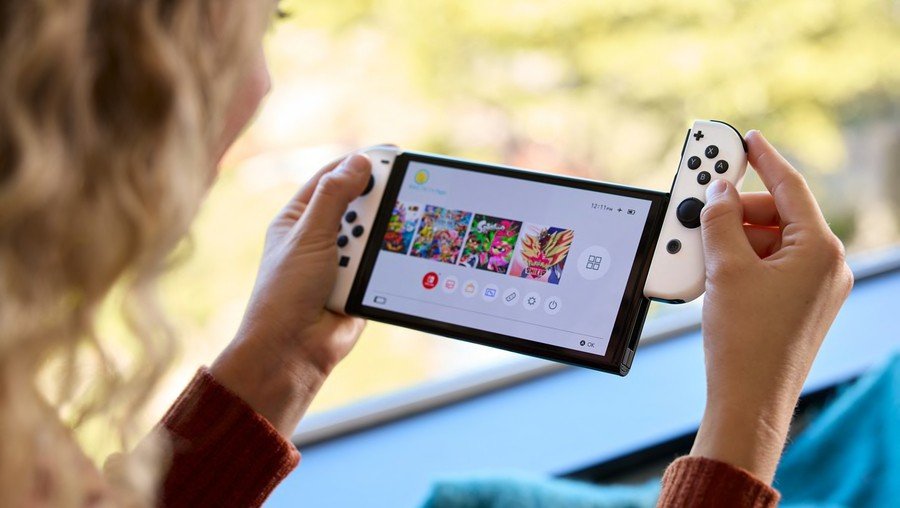 With the Nintendo Switch OLED model now just a couple of short weeks away, we’re heading into the system’s fifth Holiday season with three distinct ‘tiers’ in its hardware family. We’ve written previously about how each Switch iteration offers something different, in terms of features and price points, and how that stacks up against other gaming systems as we head towards the year’s most competitive and important shopping season. Nintendo is in its own ‘bubble’ with its first-party games and the different role of the Switch compared to other hardware, but it’s still competing for a lot of the same dollars as Sony and Microsoft.

What the OLED has also triggered since its announcement, of course, is a lot of talk about hardware strategy, whether Nintendo is getting it right and so on. There are more takes on this topic than an iffy straight-to-DVD movie, as you weigh up the huge sales success of the Switch against the online clamour for more powerful hardware. There are a lot of factors that have been at play too. There were the shutdowns and extensive disruption through 2020 and well into this year, then there are ongoing and troublesome chip shortages in manufacturing. It is hard to produce electronics right now, and that will no doubt have influenced Nintendo’s thinking and approach.

There’s a possibility that Nintendo’s plans will have been changed or delayed by the chaos of the past 18 months, but it’s impossible to be certain of that. Looking at the company’s history and trends with portable hardware, however, it could be argued that the Switch pathway has been entirely typical. Yes, it’s a hybrid device, but in terms of technology it is basically a tablet / handheld that is bolstered by clever controller and docking solutions. Nintendo is now a one-system company after decades of balancing handhelds and consoles, but it has pretty much always sold more portables than TV-based systems. It’s no surprise, then, to see the company use a familiar portable playbook as it moves deep into the Switch generation.

The similarities to the DS and 3DS generations are interesting enough that it’s worth laying them out, plain as day, as a reminder for anyone that feels the company has been ‘slow’ to move onto a more powerful system.

Very much comparable to the original 3DS, with the key difference being that a strong start and ongoing positive sales have helped to drive its results. Still the foundation of the ‘family’, but perhaps unlike the original 3DS and indeed the initial design of the DS, it is still the cornerstone of the range, which is unsurprising considering its popularity.

Model ‘HAC-001(-01)’ was a very minor revision with one notable boost for those that picked it up, and it’s replaced the ‘original’ as the standard model on the market since its initial arrival in August 2019. It features a more efficient version of NVIDIA’s Tegra GPU, which gives a substantial boost to battery life.

Comparisons with the DS and 3DS era are less direct – the DS Lite was physically very different to the original. It’s not a match for the ‘New Nintendo 3DS’ either, as that system improved a few features (more stable 3D) along with slightly boosted performance and a handful of exclusive games. With this Switch revision Nintendo locked performance to match the original model, with battery life being the only feature getting any sort of improvement. Everything else about the hardware was identical.

As for why it was released, it’s possible it was related to supply and manufacturing, and it may have been to close hackable exploits and weaknesses inherent in the original Tegra chip.

The more notable release of 2019, at least in terms of the brand, was the Switch Lite. This comparison is easy, as it serves an extremely similar purpose to the original 2DS. To cast your mind back, the 2DS did away with the stereoscopic screen of the 3DS, came at a lower price and was designed as a sturdy tablet-style device to survive the rigours of childhood play.

The Lite, like the 2DS, removes some key selling points of the standard model while offering an affordable price and a more robust design. In this case it takes away the very definition of the Switch pitch, with no ability to dock the system to a TV. The Joy-Con controls are embedded in the unit (though you can use controllers wirelessly) and there’s no kickstand, so this is the true handheld-only experience.

Though it had a sales boost in 2020 during a period where standard models were hard to come by, the trends point to the system sliding back into 2DS territory – being a valued member of the family and contributing decent numbers, but ultimately secondary to the core device.

This is another easy comparison, ultimately, matching up nicely alongside the DSi XL and 3DS XL models. The screen size increase from 6.2-inch to 7-inch isn’t quite as substantial as those XL systems, but will be notable enough side-by-side with the original model. Unlike those XL units the basic shell and dimensions will feel very familiar (though there are small tweaks to those too), but the focus of the model and its place on the market will certainly be comparable.

A notable part of Nintendo’s marketing of the XL models in both the DS and 3DS eras was to emphasize their ‘premium’ role in the range. With the OLED model the focus is on the screen, improved speakers, a much-improved kickstand and a LAN adapter in the updated dock. It’s very debatable how much these luxuries will drive current Switch owners to upgrade, and depending on bundles and deals this scribe suspects the standard model will handily outsell the OLED variation in the Holiday season.

The sales it generates (assuming Nintendo can manufacture enough to meet its demand) will be interesting to see. At the top end of the Switch family’s price range it may have more similarities in numbers to Lite than the standard model, but by that same token it’ll likely give Nintendo a higher profit margin per unit. Ultimately, like the XL models before it, its role is to be the premium option for those that are happy to pay extra for its improvements.

So, Has Nintendo Been ‘Slow’ With The Switch Family?

The internet is a very impatient place, at least if you spend too long on social media. Yet one common thread of complaint when the OLED was announced is that Nintendo is lagging behind and showing little initiative. In other words, one opinion is that Nintendo should be moving on to improved hardware, even if it follows the ‘Pro’ / ‘X’ approach adopted by Sony and Microsoft in the last generation of consoles – iterate and add power, while still supporting the original hardware for all or most games.

But, how does the evolution and timeline of Switch compare to the DS and 3DS eras (using NA release windows)? Let’s take a look, focusing on key (not necessarily all) iterations.

We’ve done multiple 3DS timelines above for added context, as the 3DS family was particularly ‘busy’ from Nintendo, and it’s extremely debatable that the New 3DS is an equivalent to the upcoming OLED. What we see is that with the incredible sales of the DS, and then the addition of download games on the DSi, is that Nintendo took its time as that generation sold so impressively. The 3DS, however, got off to a particularly poor start, and Nintendo ramped up with revisions and new models – along with various initiatives and big game releases – to lift its momentum. The 3DS ultimately recovered from its poor start to post highly respectable lifetime sales, but Nintendo continually iterated and boosted the range to lure consumers in.

With Switch there are two factors that help explain why it’s seen less revisions and activity than the 3DS. One is that its sales momentum has more in common with the DS / Wii era, in that it’s a popular system that is right at the heart of gaming culture. Secondly, we can’t ignore the huge impact of lockdowns and related challenges in 2020 and indeed well into 2021. Manufacturing in the technology space has been and is still under great strain, with struggles to meet existing demand never mind new products. Nintendo, like many companies, has also dealt with long work-from-home periods, restrictions on travel and so on. All of this has significant implications when trying to work on the logistics of designing, manufacturing and then selling hardware (and software, for that matter).

Perhaps the OLED was originally going to be out this time last year, it’s also possible that a boosted system was on the cards at one point. Only Nintendo knows that, internally, but it’s not outwith the realm of possibility. A case could be made that hardware plans in late 2019 were greatly adjusted, ripped up or simply delayed as global events took over.

Even if that is the case, what the timeline shows is that Nintendo is still following a variation of its usual pattern for portable hardware. Should we be surprised that Nintendo isn’t in a hurry to push out all-new hardware when the existing Switch and its iterations are selling so well? Like in the DS era, Nintendo has no reason to rush.

On top of that the Switch is still less than five years old. Some of us definitely yearn for better game performance from third-parties in particular, and to see a Switch logo at the end of more multi-platform trailers. Yet, ultimately, there has been impatience too, and when you look at the reality Nintendo has simply been making pragmatic moves, especially with all of the unexpected challenges of the last 18 months.

If, a year from now, there’s still no word of new and enhanced hardware, perhaps the argument that Nintendo is being overly cautious and inactive will be more convincing. The reality right now, however, is that it’s following its own – often successful – formula.