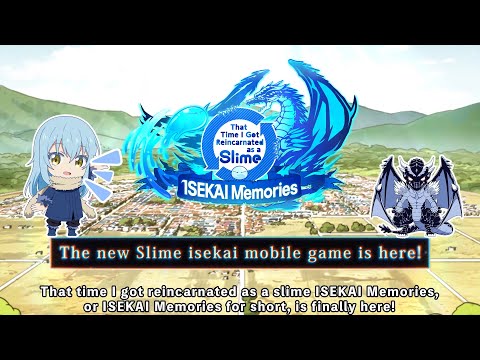 Today Bandai Namco released a new English trailer of its upcoming mobile JRPG That Time I Got Reincarnated as a Slime ISEKAI Memories, tied in with the popular light novel, manga, and anime franchise.

This time around, we get an in-depth reveal of the gameplay, which will include some rather fetching turn-based battles and a town management minigame. Interestingly, players will also be able to explore the town on their own feet.

There will also be an extensive story mode, including well-known and original characters, some of whom are certainly… interesting.

We already know that That Time I Got Reincarnated as a Slime ISEKAI Memories will be released simultaneously in all regions this year, including North America, Europe, and Asia.

You can check the trailer out below.

If you’re not familiar with That Time I Got Reincarnated as a Slime, originally named Tensei Shitara Suraimu Datta Ken in Japan and familiarily nicknamed TenSura, was born as a light novel series by Fuse in 2013.

It then spawned a bunch of manga and a long-running TV anime series. Now, fans will be able to enjoy it in mobile JRPG form, and it appears that the production values are quite high, from what we’ve seen so far.

It’ll be interesting to see if this will mark the successful break into the worldwide mobile market that Bandai Namco appears to have been hunting for a while.

The post That Time I Got Reincarnated as a Slime Mobile JRPG Gets New English Trailer Explaining the Game appeared first on Twinfinite.