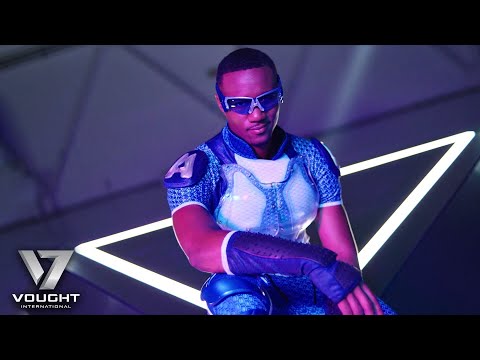 The Boys' A-Train (played by Jessie T. Usher) stars in a music video for his own song "Faster,"which revolves around the character's super-speed. This song fits right into the character's brash personality with the fast cars, flashing lights, and mirror images of himself. The Boys is streaming exclusively on Amazon Prime as a live-action adaptation of the graphic novel series of the same name.

The Boys continues to tease fans about the upcoming third season of its hit successful superhero television show. For those who don't know, The Boys revolves around a world in which superheroes aren't what they seem. Instead of being the lighthearted, cat-out-of-a-tree saving, and smiling heroes that fans all used to in the Marvel and DC comics, these heroes are money-hungry, backstabbing, self-loathing individuals who are in a kill or be killed world.

The heroes have to battle to keep their spots and a lot of that effort involves compromising their morals in order to stay in the limelight or even protect their life/family. A-Train killed one of his loved ones, for example, in order to escape the death he was paranoid of experiencing from a fellow superhero. The story follows Starlight, who was an aspiring young hero until she learned how dark and twisted the world of being a superhero was. It's no longer a battle of good vs. evil, instead, it's a battle of politics, staying on top, and earning The Boys' parent company Vought as much money as they can.

Vought International is also the company that dropped this music video. The Boys does a good job of promoting the show by breaking the fourth wall with the Vought YouTube channel. It's as if the fictional corrupted company has its own social media page and if one were to check it out, they would see various other videos that promote the show in the same vein.

A-Train started out very brash and hot-headed, but now he's currently going through a "redemption phase" where he's no longer the "it guy." He has to earn his spot back and is starting to receive the dark side of humanity that he used to be throwing out to other people. This music video may be his way of trying to get on the good side of PR, or maybe it's him trying to regain the confidence he's clearly losing throughout the course of The Boys.

The show has been taking its own route from the graphic novel's storyline, but that hasn't stopped fans from continuing to watch. The graphic novel is also known for being just as dark as the show itself, but even the series has its limits to what it can put on TV. Right now The Boys franchise is on two media platforms, but many think there's a video game on the horizon as the show continues to grow.

The Boys season 3 is currently in production.

MORE: What If…? Is Proving How Easily Heroes Can Become Villains (And Vice Versa)