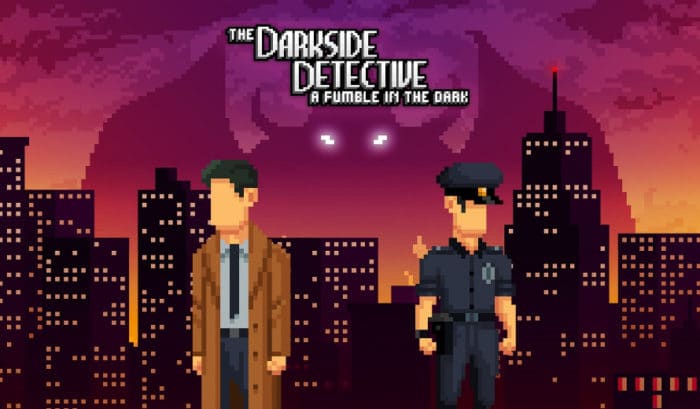 Developer Spooky Doorway has released a free new case for their game The Darkside Detective: A Fumble in the Dark. The free bonus case has players rejoin Detective Francis McQueen and Officer Patrick Dooley to solve a unique holiday mystery in this free DLC called Ghosts of Christmas Passed.

The free case will be available on PlayStation (PS4, PS5), Switch, PC, and Xbox (Xbox One, Xbox Series X).

This is what Dave Mccabe, writer, had to say:

“Ghosts of Christmas Passed is something we’ve been thinking about since we released the previous Christmas case, Buy Hard. That let us seed in a teeny bit of foreshadowing through A Fumble in the Dark, something unique to our format that we think is a wee treat for eagle-eyed players. It has everything: characters, art, noises, words – I think we might even have included a ghost?”

You heard it here first. The free bonus case may or may not include a ghost.

If you aren’t already aware of what The Darkside Detective: A Fumble in the Dark is, then allow me to clear that up. It is a pixel art adventure game. Click around the screen and solve puzzles in order to get to the bottom of your current mystery.

Unfortunately, this isn’t a game I’ve had the chance to play yet. I am a fan of adventure games, however, and this has been on my list of games to play for a while.

It’s good to know that when I do get around to the game it will have even more cases for me to solve. A game getting post-launch support, especially for free, is always a good thing.

The post The Darkside Detective: A Fumble in the Dark Offers Free Bonus Case appeared first on COGconnected.