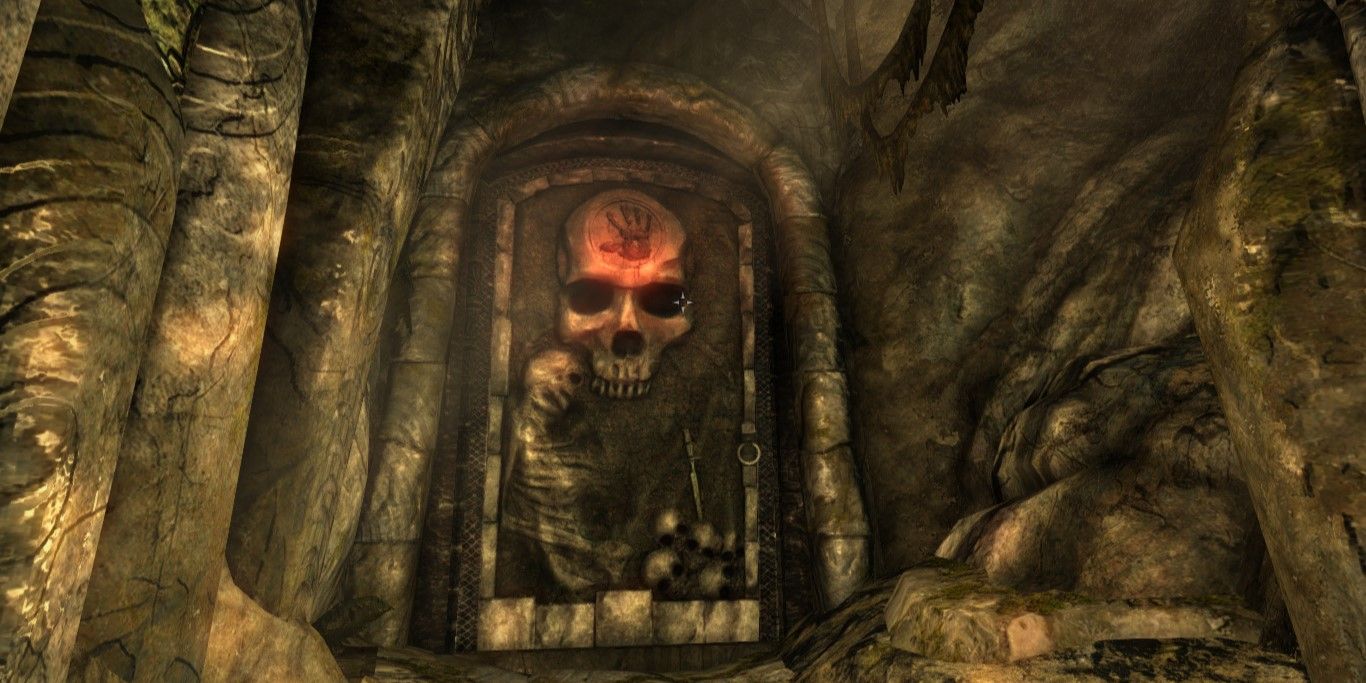 Skyrim introduced millions of new players to The Elder Scrolls franchise. Part of its success can be credited to its easily digestible premise. Heroes? Vikings. Bad guys? Dragons. Throw in some roughly recognizable Elves, Orcs, and some cities seemingly lifted straight from The Lord of the Rings, and it’s not hard for most players to throw themself headfirst into Bethesda’s open world.

Skyrim’s accessibility may have been a key part of its success, but The Elder Scrolls wasn’t always so easy to understand. The franchise’s early lore, much of which concerns the creation of the universe itself, can seem totally bizarre, even to players who started the series with Arena. Of the strange spirits inhabiting the Elder Scrolls universe, the Daedra make their presence most felt. They aren’t alone, however. The Aedra and Daedra, known collectively as the Et’Ada, are some of the games’ most interesting characters, and their story is one of the series’ strangest.

RELATED: The Elder Scrolls 6’s High Elves May Face More Opposition Than They Did in Skyrim

To understand Bethesda’s Elder Scrolls universe, it can be useful to start on the outside. According to former Bethesda writer Michael Kirkbride, who was responsible for many of the in-game books on the setting’s strangest lore from CHIM to Dragon Breaks; the entire Elder Scrolls universe takes place in the unconscious mind of a dreaming “godhead.”

If a being within the Elder Scrolls universe truly realizes that it is just a figment of this godhead’s imagination, it will either assert its individuality regardless and achieve the godlike state of CHIM, or be subject to Zero Sum – total erasure. Some theorize that this might be the cause of the Dwemer disapperance. The Et’Ada are also figments of the godhead’s dreaming and are known as “the Original Spirits.”

These Original Spirits were not originally divided into the Aedra and Daedra, which in Aldmeri (the original language of the Elves) means “our ancestors” and “not our ancestors” respectively. There are several accounts of the origins of Mundus, the world the continent of Tamriel is on. These depend on in-universe religion. In most versions the universe begins with a single being, known as Anu the Everything.

The existence of Anu led to the necessary existence of an opposite force, known as Padomay or Sithis. It’s often implied that these beings weren’t exactly gods or even conscious minds, but primordial forces. Their existence and interconnectedness is often understood simply as light and darkness.

In the heavily mythologized accounts that trickled down to the Tamrielic religions seen from in-universe books like The Annotated Anuad, “the interplay of Light and Darkness” created another being named Nir. Both Anu and Padomay loved Nir, but Nir only loved Anu. Nir became pregnant with creation itself, giving birth to twelve worlds but dying in the process. Jealous, Padomay destroyed the twelve worlds, but after Anu defeated him Anu attempted to salvage them into one world, Nirn. According to the Anuad, Padomay then stabbed Anu from behind, and as they fought the twins fell outside of time forever.

The Aedra And The Daedra

In one version of events, Anu’s blood became the stars, Padomay’s blood became the Daedra, and in the places their blood mingled the Aedra were formed. Because they contain both the blood of Anu and Padomay, the Aedra are said to have the capacity for both good and evil. The survivors of the original twelve worlds were the Ehlnofey – the spirits that would eventually become Elves and humans, and the Hist, the sentient trees worshipped by the Argonians.

That’s just one account. In others, the original “interplay of Light and Dark” created many different spirits, the Et’Ada. One of these spirits was Lorkhan, who in the Dark Brotherhood’s account was created by Sithis – Padomay – himself.

Depending on the telling, Lorkhan either convinced or tricked the other spirits into creating the mortal plane, Mundus, the reality in which Nirn existence. The spirits who invested their power into this act of creation became the original Eight Divines, while those who refused and sought to undermine it became known as the Aedra.

The world the Aedra helped create turned out to be more volatile than expected, and the Aedra decided to punish Lorkhan. Lorkhan’s heart was ripped out and buried deep beneath Tamriel until its discovery by the Dwemer in the First Era. The Aedra then left Mundus, retreating to Aetherius, the Immortal Plane and the source of magic and creation where realms like Sovngarde and after afterlives can be found.

To most humans in Tamriel, Lorkhan – or “Shor,” to the Nords – is the creator god, a Prometheus-like figure. To many Elves he is the trickster who, in creating the Mortal Plane, robbed the Ehlnofey of their divinity.

It is said that the Daedra refused to participate in the creation of Mundus because they did not want to give up some of their power. Instead, they chose to create their own realms, hence why every Daedric Prince seen in The Elder Scrolls has their own plane of Oblivion. From there, they interfere with the lives of those in the Mortal Plane and create their own Daedric races to serve as their soldiers and servants.

Gods And Demons In The Elder Scrolls

Just as Anu and Padomay were considered necessary opposite like light and darkness, Oblivion is portrayed as the inverse of Aetherius, though how that meaningfully manifests is left vague. Playing through the games, it’s easy to summarize the Aedra and Daedra as the gods and demons of The Elder Scrolls universe. Their creation myths, however, reveal them to be far more complicated.

The Aedra aren’t necessarily any morally better or worse than the Daedra, they are simply more distant, keeping largely to themselves after punishing Lorkhan for the creation of Mundus. The Daedra, on the other hand, take pleasure in putting mortals to the test and rewarding their followers. Anu and Padomay were essential opposites, but the line between the Aedra and Daedra is more arbitrary, describing behavior more than a fundamental essence by most accounts.

Those accounts do vary greatly, however. The lack of a clearly defined creation myth helps make the world of The Elder Scrolls feel more mysterious and its higher planes as incomprehensible to players as they are to the mortals of Tamriel itself.

MORE: The Elder Scrolls 6: The Redguard’s Religion Will Be a Far Cry From Skyrim’s