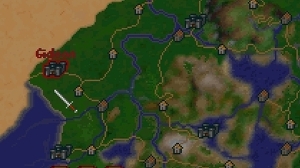 The Elder Scrolls Online’s upcoming chapter includes a city not seen in a game in the famous fantasy series since 1994’s Arena.

Blackwood, the Oblivion-themed chapter due out for The Elder Scrolls Online in June, includes Gideon as a hub city.

Gideon is an Imperial-based city built on Ayleid ruins but run by the argonians. It’s situated on the eastern portion of the new zone, and borders the Black Marsh area.