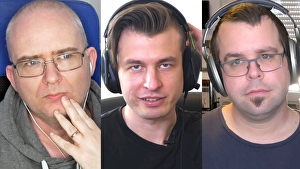 DF Direct Weekly is back once again – inevitably perhaps, given the name. This is the weekly discussion show where the Digital Foundry team down tools for a couple of hours and talk shop, sharing some of the behind the scenes stories on the content they've been working on and taking on a outsized raft of always-awesome questions from Patreon supporters.

This week, the team mull over the big rumours surrounding Sony, specifically discussing the mooted remake of The Last of Us, the apparently dead-in-the-water Days Gone 2 and the platform holder's general approach to its first-party line-up. After that, the chat moves on to the recently revealed trailer for Mass Effect: Legendary Edition – the remastered rendition of the classic trilogy coming soon. Also taking up a good chunk of our air time are the most interesting stories from Nvidia's GTC event. GTC is more of a trade/professional kind of thing as opposed to anything consumer-facing, but it's often the showcase for technologies to come in the gaming space, and there have certainly been some interesting presentations from game-makers this year.

As for supporter Q+A, the team tackle a range of topics, kicking off with the games that made the most impact on them across the years, exactly when we should expect to see ray tracing hardware become an essential requirement for gaming, along with the importance of Japanese titles in the market – and to the success of Sony's new console in particular. Beyond that, what are the big technological advances we expect to see this generation? Quite a lot of the discussion actually kicks off in the Digital Foundry Discord available to all Patreon supporters – and we're busy growing a positive and engaging community there. Think about joining us to get involved and to regularly talk directly to the team and to share news and ideas – I highly recommend it.