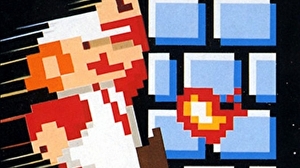 The current world record video for Super Mario Bros. is only eight minutes long, but you don’t need to see much of it to understand something special is going on. As Niftski rushes through the NES title, he pulls off some incredible feats that most wouldn’t think possible. What is truly impressive, though, is when Niftski stops the timer. Emotions fly. The final number shows: 4:54.948.

By what was just a single frame, the 4:55 barrier has been broken, and the SMB speedrunning community is celebrating a historic occasion. The last time a second barrier was broken for the titles was in 2018, so for Super Mario Bros. this isn’t a common occurrence, and the emotion in Niftski’s video shows how big a deal it is. “It just feels insane that I have this good of a time in [Super Mario Bros.],” he tells me over Discord. “Me and a few other top level runners started the race to 4:54 after Miniland got his former world record speedrun of 4:55.230 [in February]… we all knew it was going to be a tough grind, but we were all dedicated to getting this time.”

Reaching 4:54 is a big deal. To those outside of the community and looking in, though, it may be difficult to understand why it matters quite so much.