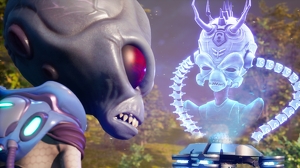 THQ Nordic is bringing the high-gloss extraterrestrial terrorising of last year's Destroy All Humans remake to Switch this summer, with the game set to arrive on 29th June.

Developed by Black Forest Games, the Destroy All Humans remake takes the 2005 PS2 and Xbox original – in which evil alien clone Crypto-137 rampages across 1950s Earth, obliterating every man, woman, and bovine in his path – and gives it a gloriously lavish lick of paint.

The fundamentals remain the same – meaning on-foot and UFO-bound missions across six large, open levels in which players cause devastation using psychokinetic powers and alien weapons of dubious purpose – but it's all given a fresh lease of life with presentational enhancements including some truly sumptuous visuals.