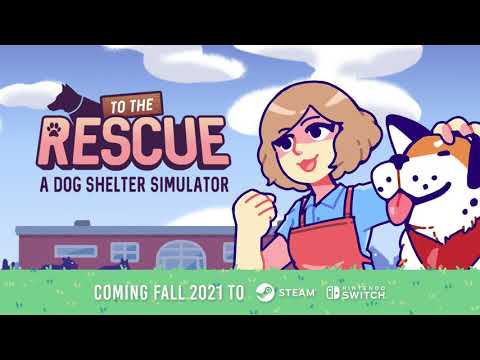 To The Rescue, the dog shelter simulator, is going to be released on November 4th for PC and Mac, Little Rock Games and publisher Freedom Games have confirmed. The Nintendo Switch version of To The Rescue will not be released at the same time, but it will instead be coming to the console in Q1 2022. It has also been confirmed that 20% of game proceeds will be donated to The Petfinder Foundation which supports animal shelters. Players will have to begin by building a shelter and creating a place that can help dogs find their forever homes, as well as having to manage finances, supplies, and keep each of the individual dogs happy.

When To The Rescue was announced Olivia Dunlap, co-founder of Little Rock Games, said: “The challenges dog shelters and their volunteers face every day truly inspire us. It’s a setting we felt was ripe for exploration in games and we look forward to bringing this world to Nintendo Switch and Steam later this year.”

Each dog will have its own personality so players will have to be aware of each one of their needs and personalities. It is not all fun and games though as dogs can get ill, so you will need to help them recover and stop any potential infections spreading to other dogs in the shelter. Potential adopters will come and visit the shelter, and it will be the players role to match them up with the best dog for them. Some dogs will be snapped up quickly, while others will need some extra help to get picked. Players will also have to help integrate the shelter into the local community too, with education days and community events. To The Rescue does have a story mode to it that follows the evolution of the shelter.