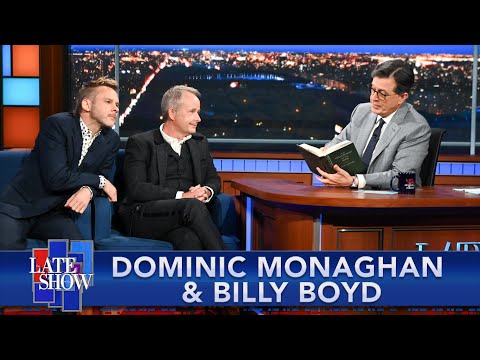 The late-night TV host Stephen Colbert is known for being a Tolkien superfan, and his guests often ask him questions about Middle Earth—usually about The Lord of the Rings. He has gained quite the reputation for always knowing the answer to a question regarding Tolkien’s work, no matter how minute or obscure the detail is.

Over two months ago, Colbert invited Lord of the Rings stars Dominic Monaghan and Billy Boyd onto The Late Show so they could discuss a bit about their new podcast The Friendship Onion. Monaghan and Boyd are most well known for their roles as Merry and Pippin from The Lord of the Rings. On their podcast, they discuss different things like movies, food from around the world, current events, and of course they talk about their time filming one of the greatest trilogies ever made.

RELATED: The Order Of The Wizards: Who Were The 5 Wizards In The Lord Of The Rings?

They have both read the books and have done a lot of research about their characters to prepare for their roles, and they've spent two years (which is how long it took to film the trilogy) of their lives doing nothing but thinking about The Lord of the Rings. So when it came time for them to have their turn asking Colbert a LOTR question, one of the actors was able to ask a question that Colbert struggled with.

Before the two asked their Lord of the Rings questions, it was clear that Colbert seemed to be a little nervous. After all, he was about to be asked questions from two of the people who helped bring the books to life. Monaghan went first, asking a question that Colbert answered with relative ease. But when it was Boyd’s turn, he asked, “So as you know, Merry and Pippin meet Treebeard. He is an Ent. The Ents have a meeting with Merry and Pippin. Which is called an Entmoot.” Colbert comedically responded with, “I’m familiar,” which got a laugh from everybody. Boyd went on to ask, “They have this Entmoot in Fangorn Forest, but where in Fangorn Forest?”

There was a brief pause before Colbert's face said it all. He did not know the answer. Colbert had to take off his glasses and couldn’t keep the sheepish grin off his face. He contemplated his answer for a bit before responding with, “I don’t know, I don’t know the name of it.” Both the two actors and the audience were shocked. It didn’t help that Monaghan was playfully taunting Colbert, and audience members yelled out silly answers like “New Jersey.” Colbert called for everyone to be quiet, but he could not remember the answer. Boyd exclaimed, “Stumped by Pippin.”

The answer was Derndingle, and it seemed Colbert had remembered the name as soon as Boyd told him the answer. He joked by saying the editors could cut out his lack of an answer. Boyd may not have been the only person to stump the Lord of the Rings fan, but he is one of the few.

The Lord of the Rings films are available to stream on Amazon Prime Video.