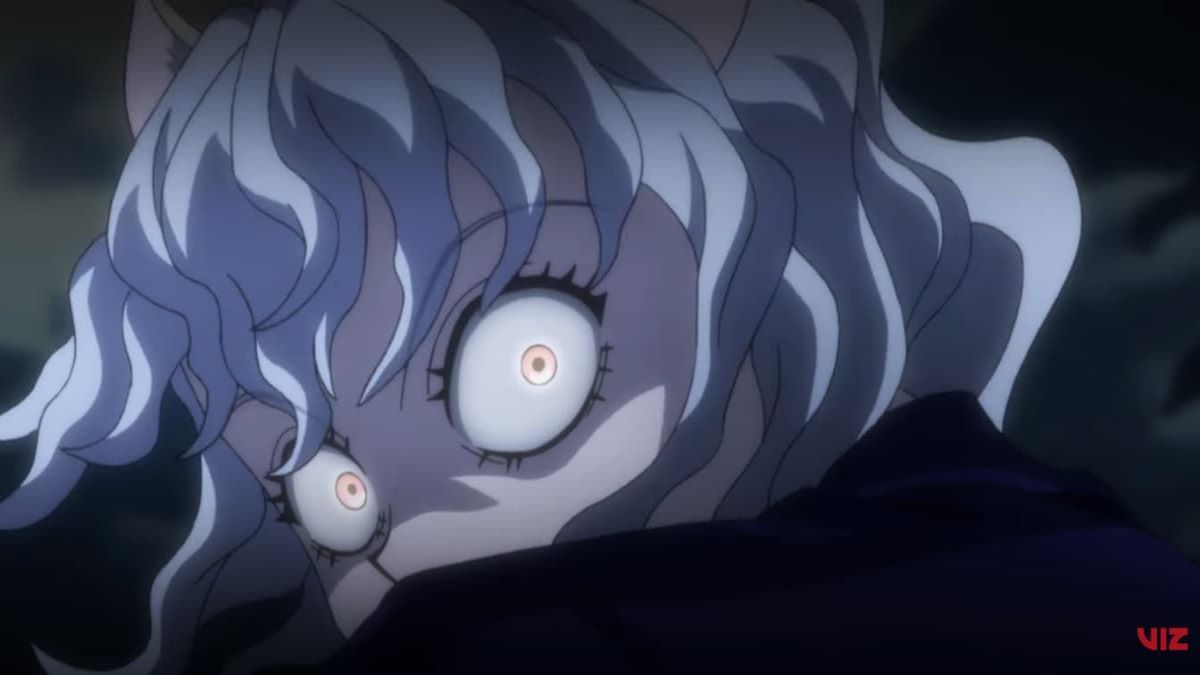 ***SPOILER WARNING: This article and its contents contain considerable spoilers for the entirety of Hunter x Hunter. If you aren’t fully caught up on the anime yet, then come back once you are.***

Neferpitou, also known as “Pitou,” is one of the strongest and scariest antagonists of Hunter x Hunter. Her first appearance marks a turning point for Gon and Killua in the Chimera Ant arc. Seeing Pitou’s natural strength, the boys realized they weren’t strong enough to stop her, and all their training from before needed to be re-evaluated.

Pitou’s powers are both frightening and impressive. Her “En” is by far the most sinister and wide-ranged, while her hearing and sight have the ability to target enemies even further. Her other power of puppeteering can control both Nen users and human soldiers in order to advance their colony in more ways.

Out of all the Royal Guards, Neferpitou’s skills are used the most out of the three of them, and Chairman Netero believes her to be even more powerful than him. Neferpitou’s transformation as a character also develops considerably as the story progresses.

In the beginning, she is as an animalistic killer who survives and thrives on instinct alone. By the end of the show, she’s evolved considerably, even going as far as to care and put her life on the line for the well-being of a human she barely knows, simply due to how she cares for her King.

Neferpitou’s dedication and need for the King to be himself, rather than just keeping him alive, shows her character growth. This change makes Pitou one of the most fascinating females in all of Hunter x Hunter.

Biscuit Krueger is the eccentric master of Gon and Killua in the Greed Island arc; the one responsible for teaching them both how to use “Nen” properly in such a short time. What makes Biscuit a fascinating female character in Hunter x Hunter is her ability to not be ashamed of her femineity.

When Killua pokes fun at “girly” powers, Krueger stands up for her skills, showcasing that the boys have a lot to learn and to never judge a book by its cover. Her power to maintain her youthful look does cause enemies to underestimate her, and Killua eventually respects Biscuit and values her input despite their quarrels beforehand.

When Biscuit makes a brief appearance in the Chimera Ant arc, her arrival comforts Gon and Killua at their lowest point. Once again, her teachings push the limits of their strengths. If Biscuit didn’t show up, Gon and Killua would never have been strong enough for the mission to infiltrate the King’s new base, as even the slight influence and confidence she provide them in that short time was vital to their success.

Biscuit Krueger’s teachings are the reason Gon and Killua can even advance on as Hunters. Not only are her training methods different from others, but they are also exciting and fun to watch. Biscuit’s method of initiating healthy competitions with the two boys shows she can make her training both enjoyable and knowledgeable.

Melody is arguably one of the most underrated parts of the Yorknew City arc, as her calming presence plays a large role throughout the story. She’s a Music Hunter that is strong enough to ease the mind of Kurapika, even when he’s in his bloodthirsty Scarlet Eyes state.

The physical appearance of Melody also makes her unlike any other female character in anime, as there is another layer of depth that is added to her character due to the unique circumstances surrounding her looks. She is constantly perceived as a boy because of the way she presents herself, but Melody never allows their opinion to want to change her looks to more feminine.

Melody’s reasoning for being a bodyguard for the Nostrade family shows her unselfish ways because she doesn’t want anyone else to experience what happened to her when she heard the demonic tune, Sonata of Darkness. Kurapika doesn’t rely on many people, but Melody’s story causes him to trust her. Her selfless intentions and her strength to be true to herself prove that she is one of the best characters in Hunter x Hunter.

Canary is an apprentice butler, but she’s powerful enough to stop a Hunter and his group all by herself. Since she was born in Meteor City like the Phantom Troupe, this offers another side to people originating from there. The Troupe’s upbringing made them unsympathetic and reserved; while Canary’s emotions are straightforward enough for Gon to see in their first meeting.

The balance of Canary’s brute force and caring side is what makes her an interesting character to watch. Instead of simply guarding her master, Killua, she also wants the best for him and goes beyond her line of duty to help achieve that in the Unofficial Zoldyck Family arc and the 13th Hunter Chairman Election arc.

Just like Killua, Canary is someone that still cares in a pre-dominantly cold-hearted environment. Her worth to Hunter x Hunter expresses that not every powerful person needs to be heartless.

Alluka Zoldyck is easily the most powerful Zoldyck in the family, as she can grant any wish to anyone as long as they complete her requests. Characters had previously brought horror-like elements to the show, but not like Alluka when people have failed to meet her requests resulting in gruesome deaths.

Alluka’s arrival to Hunter x Hunter was a surprise no one saw coming since most of the Zoldyck family had been shown – though there were brief mentions of another child leading up to the reveal. Once Killua sees her again, the loving bond the two share is evident, which was astonishing to see since he had never really mentioned her before.

During the 13th Hunter Chairman Election arc, Illumi and Milluki Zoldyck refer to Alluka as a “he.” Despite everyone else, Killua uses “her” and “she” pronouns when talking about her. Unlike Melody, Alluka was born a male, and Killua respects her preferences because he cares a lot about her and does what makes her happy.

Alluka Zoldyck is already fascinating with her powers, yet what makes her truly amazing is her self-identity. When she is possessed by the creature, Something, she doesn’t fear that part of her and accepts the being in her own way. At first, even Killua treats the mysterious creature as a monster, but ultimately realizes he should be the big brother that loves his sister fully, including Something.

Alluka’s addition to the show makes what could have been a somewhat dull political landscape that makes up the Election Arc into a much more exciting plotline and character journey. Her acceptance of herself and Something expresses the belief to love every part of yourself, including the darkness that lives within all of us.

Mito Freecss is a great example of an influential character that doesn’t have a huge role in the story, as she’s responsible for raising Gon, the main character of the whole series, despite not being his biological parent. In fact, Mito was such a good parent, that Gon had no need to know who his real mother is.

Gon could have every intention to want to find his biological mother just as much as he wants to find his father, though he denies the chance to find out about her because he truly believes Mito is his real mom. While it may sound hard to believe that Gon wouldn’t want to meet his mom, it’s important to look at the Mito’s characterization from the get-go.

Instead of keeping the truth about Gon’s parents, Mito confesses to Gon how his father, Ging, left him to be a Hunter. While Leorio Paradinight did eventually punch Ging in the face as a receipt for this, it was Mito that first questioned Ging’s parenting, asking him why he won’t say on Whale Island and even wondering why Gon would want to follow in his footsteps later on.

When it comes down to it, Mito is the most realistic and caring character in Hunter x Hunter, raising Gon the best she can and caring for him no matter what. She is a person that expresses a deeper truth of strength, displaying that not all power comes from physical strength; that a mother’s determination can be just as meaningful.

As a member of the Phantom Troupe member, Pakunoda cements herself as one of the most capable and badass characters in Hunter x Hunter right from the start, especially when it comes to female characters. In fact, her ability is powerful enough for the leader of the Phantom Troupe, Chrollo Lucilfer, to regard her as one of the lifelines of the Spiders.

Known as Psychometry, this ability can learn the memories of anyone she comes into physical contact with, something that proves useful for the Troupe and causes Killua and Gon to be fearful of her touch. Pakunoda also has excellent marksmanship with her guns proving she can still put up a fight.

While a great story on its own, the ending of the Yorknew City arc is also much more impactful due to Pakunoda’s sacrifice. Her dedication to wanting the founding members of the Troupe to know the truth is what causes Phinks Magcub and Feitan Portor to understand the connection they all have with one another.

The tear-jerking scene of the conversation between her, Gon, and Killua walking to Kurapika and Chrollo shows the respect enemies can have for one another. Phink’s final words about Pakunoda to Gon and Killua were, “Paku wanted to thank you,” which became a sentiment that changed the course of the Phantom Troupe’s way of life.