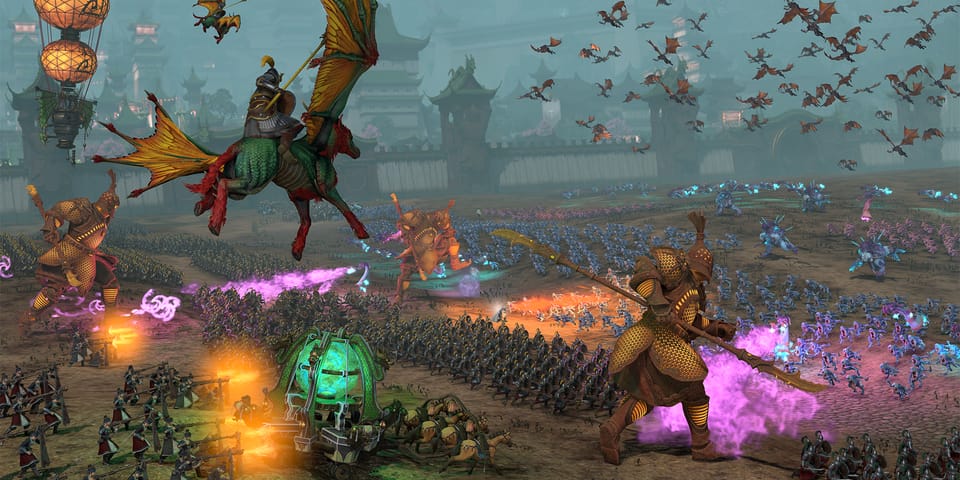 Total War: Warhammer 3 might have just been delayed to 2022, but Creative Assembly have followed up that serving of disappointment with the spoonful of excitement that is the unveiling a new faction that will feature in the game: the Grand Cathay.

Inspired by Imperial China, the Grand Cathay empire lies even further to the east of the Warhammer fantasy world than the Russia-inspired Kislev. Ruled over by the Celestial Dragon Emperor and the Moon Empress, it is a mysterious, but militaristically advanced land with flying ships, huge ornate cannons and rocket infantry. Grand Cathay can also lean on the mystical and supernatural in order to defend the Great Bastion, animating towering Sentinel statues, and their rulers able to turn into epic looking dragons as they fight off the forces of chaos in the reveal trailer.

What’s going to be interesting is how this ties in with the world that has been constructed through the Total War: Warhammer trilogy. While Grand Cathay is the largest human empire found in the Warhammer world, they are relatively detached from the western side of the map and haven’t featured all that heavily in the tabletop game and lore building by Games Workshop… up until now. Specifically so that Creative Assembly can include Grand Cathay in the game, Games Workshop has dug in and crafted more background and story surrounding the Grand Cathay. Still, it might be tricky for them to involve Grand Cathay in the struggle that the united forces of good endure against Chaos on the other side of the world. Will they just have their own specific campaign and map?

Announced back in February, Total War: Warhammer III will feature a new grand campaign, tasking you with saving or exploiting a dying god, with each race having a different journey through the Chaos Realm that builds up to an endgame to decide the fate of the world. Previously revealed were the icy forces of Kislev and the Chaos armies of Khorne.

We went hands on with a preview of Total War: Warhammer 3 a little while ago, playing as Kislev as they stepped into the realm of Khorne in the new Survival battle mode. We said:

All in all, it’s a fun twist on the classic style of Total War battling. While it’s called ‘Survival’, in truth you’re alternately defending and attacking, going from a push forward to a capture point to setting up defences and choosing where to spend your precious Supplies.

The first Total War: Warhammer was centred around the Old World (a fantasy representation of Europe), while Total War: Warhammer II looked to the lands to the West where the High Elves had retreated to, leaving the eastern reaches of the Warhammer world as unexplored territory for Warhammer III to explore. This was the plan all along, of course, with Creative Assembly embarking on a trilogy to explore these different realms. The surprise, perhaps, is that it’s taken this length of time. The first game arrived in May of 2016, and followed in September 2017 by the sequel. It’s been quite a long wait in comparison for the third entry in the series to arrive.