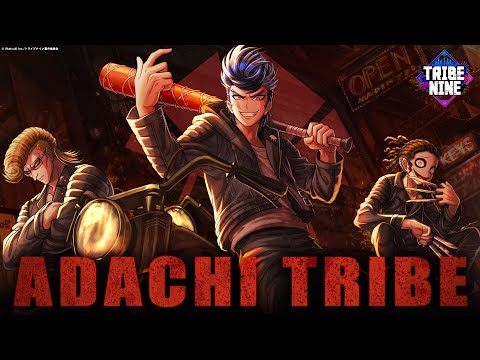 Akatsuki and Too Kyo Games released a new trailer of their upcoming mixed media project Tribe Nine, introducing one of the tribes included in the game.

The new showcase the Adachi Tribe alongside its song “Fire,” focusing on showcasing its characters and theme.

This follows previous trailers focusing on the Minato and Chiyoda Tribes.

If you’re not familiar with Tribe Nine, it was originally revealed all the way back in February 2020 and teased once more a few weeks ago. The project will include a mobile 3D action JRPG and an anime TV series.

The story is set in Neo Tokyo in 20XX, a place in which 23 different tribes associated with the city’s districts are locked in conflict in which victory and defeat are decided by “Extreme Baseball” (XB) matches. Those battles happen across the entire city.

Besides Danganronpa creator Kazutaka Kodaka for Too Kyo Games and Akatsuki’s Shuuhei Yamaguchi, more creators are involved in the Too Kyo Games side, including Zero Escape creator Kotaro Uchikoshi and more.

The music will be composed by Masafumi Takada while the art is by Rui Komatsuzaki, both of whom are known for their work on the Danganronpa series.

The TV Series will be animated by Liden Films and directed by Yu Aoki. It’ll air in Japan in January 2022.