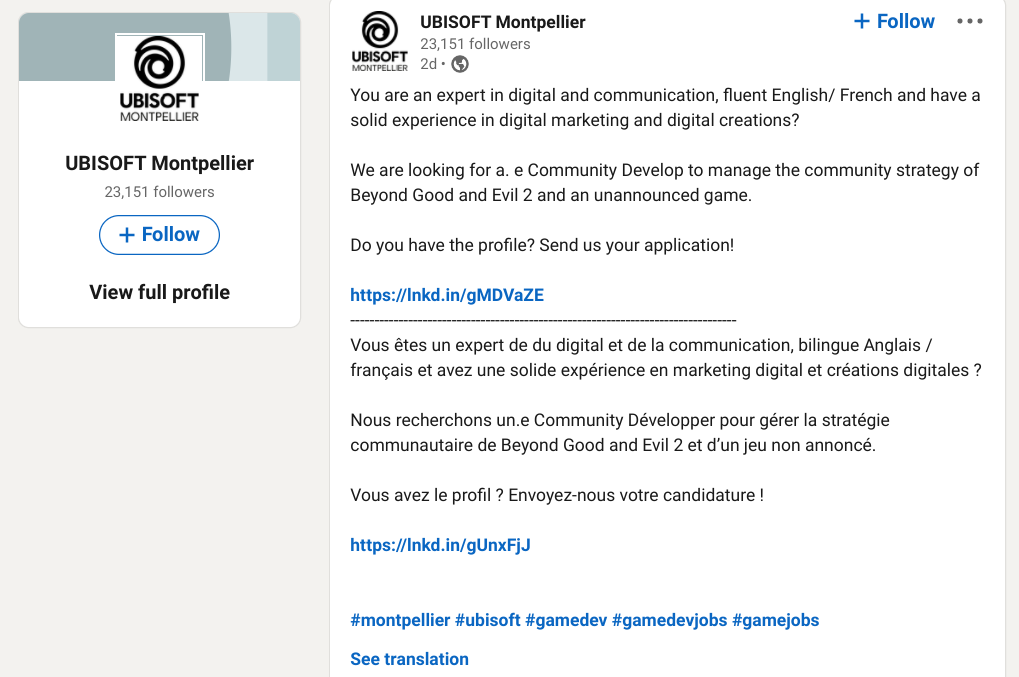 Ubisoft Montpellier has posted some new job listings, which reveal that besides Beyond Good & Evil 2, the studio is also working on an unannounced game.

A LinkedIn post from Ubisoft Montpellier is currently advertising for the role of Community Developer, although it explicitly says that it's for both Beyond Good & Evil 2, and an unrevealed title.

RELATED: Avatar: Frontiers Of Pandora Is Next-Gen Only Due To The Game's Scale

The post says, "We are looking for a Community Developer to manage the community strategy of Beyond Good and Evil 2 and an unannounced game."

This is the first confirmation that Ubisoft Montpellier is working on something besides Beyond Good & Evil 2, which has been in development for more than four years now.

Although this might be asking for disappointment, the first series that comes to mind when thinking of Ubisoft Montpellier is Rayman. We haven't seen a brand new console entry in the Rayman series since 2013's Rayman Legends and it's what the studio is largely known for. A new Rayman is something fans have been wanting for years and Ubisoft has remained strangely quiet on one of its most popular characters.

Beyond that, Ubisoft Montpellier also developed ZombieU, which was a promising concept that was attached to a piece of hardware that didn't sell too well. The team could be taking those concepts and developing a sequel on newer hardware. It's also possible that the team is working on something completely new and not related to what they've been working on.

It's also interesting to note that this is the first time Ubisoft has referenced Beyond Good & Evil 2's development status for quite some time. Fans had been hoping to see it appear at Ubisoft Forward last month, but it was completely absent, which has fed worries that the game is still having development issues.

Some fans have taken this job posting to mean that Beyond Good & Evil 2 is nearing the end of development, but considering the lack of announcements, it's just as likely that the team is working on something in between the start of that game's development and its release.