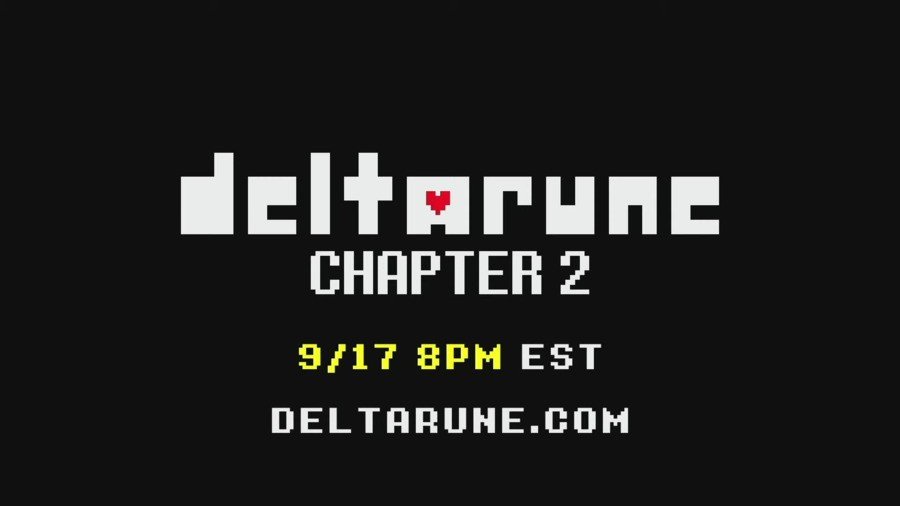 Update [Sat 18th Sep, 2021 02:00 BST]: Deltarune Chapter 2 is now available on PC. It seems Nintendo Switch owners will have to wait a little bit longer. On the plus side, creator Toby Fox has confirmed the second chapter has been released for free:

Original article [Thu 16th Sep, 2021 03:55 BST]: It seems like ages since we got an update on the progress of Deltarune Chapter 2, and now we've finally got some new information to share.

At the end of today's sixth anniversary Undertale Livestream, it was revealed the second chapter of Toby Fox's latest game would arrive this week on 17th September (aka tomorrow). The catch is it's likely only arriving on the PC. Here's the release date trailer:

In an FAQ over on the official game site, there are some extra details about "computer" save data:

Q. How do I ensure my save file from Chapter 1 carries over to Chapter 2?

A. Completion data is generated when you see the credits of Chapter 1. (Go to sleep in your bed at the end of the game.)

Q. I'm on a different computer from the one I played Chapter 1 with. Can I play Chapter 2?

A. You can play Chapter 2 without save data from Chapter 1. As long as you generally remember what happened story-wise, you'll be fine.

Deltarune Chapter 1 was originally released on the Switch eShop last February as a free download – so give it a go if you haven't already. You can also read our review, where we awarded this first chapter seven out of ten stars. If we hear anything about the Switch release of Chapter 2, we'll update this post.

Are you looking forward to experiencing the second chapter of Deltarune? Did you play the original chapter? Comment below.