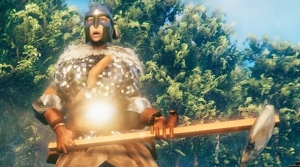 One of the worst feelings in Valheim is wanting to create a big old hill, then almost immediately running out of stone. Huh? Who got my rocks off me?

It turns out the hoe tool charges a whole bunch of stone to raise the ground, making it quite expensive to complete dirty projects. But at long last, developer Iron Gate has stepped in to solve this issue with an update.

The patch notes released on Steam explain that Iron Gate has "lowered the amount of stone required to raise ground using the hoe". Previously one use of raise ground would cost you four stone: that number has been halved to two. So that's double the amount of hoeing for your resources, hooray!