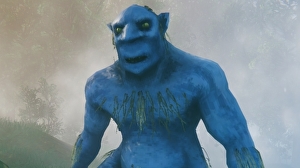 What’s going on over at Iron Gate these days? Giving trolls sculpted biceps, apparently, as the dev team has unveiled some upcoming changes to Valheim’s creatures – and that includes toned muscles for the big blue boys.

In a dev blog on Steam, Iron Gate gave players an update on how development is progressing, and what they can expect from upcoming patches. Along with more tweaks and fixes, some graphical updates are coming for the second and third bosses to give their models “new fresh looks, and have their designs better fall in line with how we envision the enemies of Valheim”. Trolls are also getting a facelift, with “more hair, nairs and more defined muscles”. Here’s a before and after:

These graphical changes are due to arrive in the next patch, but Iron Gate also teased a couple of images for Valheim’s first major update, Hearth and Home. We’ve already seen a wooden bird image for this update, and now we have a pair of shoes and a rock-filled trench to add to this cryptic mix. The latter is apparently a “pretty big part of the update, with many new items relating to it”.