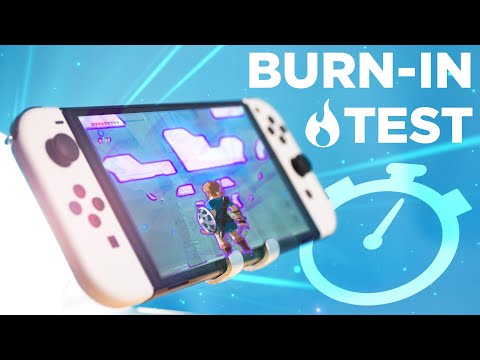 When it was revealed Nintendo’s latest hardware revision for the Switch would feature an OLED screen, concerns were immediately raised about the possibility of screen burn-in.

Although this type of display has come quite far since the days of the PlayStation Vita, the risk of burn-in is still a thing. Fortunately, since the launch of the Switch OLED model, we haven’t really heard about any horror stories, so is it actually something to be concerned about?

YouTuber ‘Wulff Den‘ has left his own OLED model on for over 1800 hours straight to see what would happen. The test used a static in-game screenshot from The Legend of Zelda: Breath of the Wild and the Hori SplitPad to keep the system’s display active. So, what was the outcome? It seems you can barely tell the difference:

“There is no difference in any of the colour test that I ran, you can also notice there’s no noticeable burn-in marks after almost being on for 2000 hours. The only difference you can kind of see is the white in the shrine ceiling, it’s ever so slightly dimmer, and the blueish-white has a slight green tint.”

“…If you’re worried about OLED burn-in on your Switch because you have like 2000 hours in a game, I think you can relax a little bit. I don’t think it’s a practical concern for anybody. I think maybe in like 10 years now we might see like a HOME screen that was in light mode burn-in on a display unit somewhere, but for the most part you got nothing to worry about.”

Wulff Den intends to leave the OLED model on to see what eventually happens, but for now, after close to 2000 hours, it seems to be doing fine. How is your own OLED model going? Tell us down below.