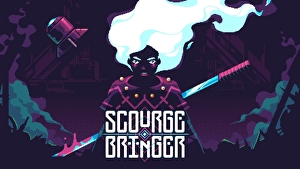 That’s not happening anymore. The shop is staying open! I’m not sure that a huge bunch of people will be sending games that way, but ScourgeBringer no longer has to feel like the last game on Vita. It can just feel like itself.

What’s ironic I guess is that what it feels like is a game that would make for a pretty good last game on Vita. This is Sony’s handheld in game form – wilful, weird, deeply lovable and with an unmistakable sense of power. ScourgeBringer’s a roguelite shooty jumpy thing in which you dash around smashing alien stuff to pieces and drinking its blood to pay for upgrades. It’s already a beautiful game and I suspect it’s never looked better to me than on this screen – it’s just swift pixelly goodness, tendrils and floating plant monsters and hideous laser gems.