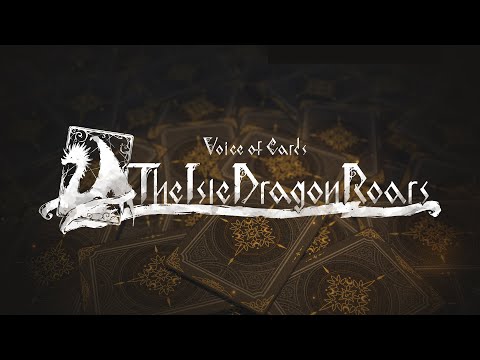 The creator of NieR and Drakengard helms a turn-based RPG with a tabletop aesthetic, where a fantasy world is represented entirely by cards.

For many, card-based video games are a Marmite proposition. You’re either fully engrossed in the likes of Hearthstone and Slay The Spire or bemused as to why anyone would choose to play with virtual cards in a medium capable of so much more elaborate escapism. And yet many who initially disparage such games end up enjoying them anyway, especially given how wildly different they can be.

Card-based games have shown more creativity in recent years than almost any other genre, with this month already seeing the release of psychological horror Inscryption. Voice Of Cards: The Isle Dragon Roars is likewise different from any other, but that’s because it’s barely a card game at all. It’s designed like a traditional role-playing video game, with turn-based battles, a party system, and an overworld you explore at will. The difference is it looks like a tabletop game, with the characters and world formed entirely by cards.

If it’s not actually a card game, then why emulate one? While it’s mostly a visual gimmick, the game does adopt some tabletop mechanics to give the aesthetic meaning. As you move around the world using a board game piece you flip cards nearby to reveal the landscape. These hide random battles, blocked pathways, villages, hidden treasure or sporadic events – like weather hazards or other dangers – with your safety determined by dialogue choices or a dice throw.

Battles also possess random elements. The power of special attacks, or the affliction of status effects like paralysis or freeze, is often dictated by whether you throw a high enough number. You pull off these attacks by spending crystals you accumulate between turns, with stronger attacks costing more crystals. This combines with happenstance cards which change the power of certain elements or alter character stats for a turn randomly. As such, battles are about exploiting weaknesses, balancing your party’s skills, and hoping luck is on your side.

Surprisingly, the best comparison for Voice Of Cards might be Paper Mario, with a similar reliance on a flat, 2D aesthetic for its visual charm. It’s satisfying to turn over cards to uncover a whole area, and transitions between menus and landscapes all share the snappy, tactile feeling of flicking through a deck of cards.

The adventure also has a narrator, who reads aloud the interactions of characters in cut scenes. You can switch this off, but the dramatic pronunciation of the occasionally goofy dialogue does lend itself well to the overall tone, especially combined with the card animations as they scuttle across the screen or bob up and down to convey laughter.

The character cards are lavishly detailed, even if the art design is a little generic. It’s the writing which sells their distinct personalities though, and while there’s no fourth-wall breaking jokes like Paper Mario, an awareness of its own silliness runs throughout. One character, Bruno, is over-sexualised to the point of parody – made all the more ridiculous by the fact he’s ostensibly a piece of card bragging about his bulging physique.

For some, the aesthetic might be irrelevant considering NieR creative director Yoko Taro has spearheaded the project with developer Alim. There’re nods to NieR with cosmetic DLC items you can purchase, and a similarly excellent score from frequent collaborator Keiichi Okabe, but those expecting a narrative to match might be disappointed by the simplicity in Voice Of Cards. There’re some enjoyable twists but the main thrust of venturing to kill a dragon doesn’t really go anywhere until the final few chapters, playing second fiddle to the character relationships.

There’s plenty of Taro’s writing though, for those who crave it. As you defeat enemies and chat with civilians you’ll unlock flip stories which provide a deeper backstory to those that populate the world. It’s a shame this storytelling isn’t reflected on the surface, with many of the villages and non-player character you visit largely cut and paste copies with different dialogue. It might be intentional to play up the idea you’re traversing through a deck of cards by having duplicates, but it makes each village feel visually repetitive and indistinct.

The adventure, which can be finished in around 15 hours, generally feels short-changed by its length. The first five chapters (of seven in total) are a breeze, and it’s not until you have all five party members available to select between that the intricacies of combat shine. As you level up, each member unlocks individual skills and abilities, which you have to experiment with to overcome boss fights in later chapters. The lengthy dungeons in the final stretch extend the experience, but it still wraps up just as it finds its stride narratively and in combat.

Voice Of Cards also offers distractions beyond the campaign. Aptly, there’s an actual card game tucked away in the Game Parlor. It’s like a version of Rummy with added power-ups, as you form sets of cards (whether a pair or three in sequence) to score the most points, with certain pairings granting powers to affect the game; like blowing up all sets featuring the number eight or cancelling a player’s turn. It’s chaotic and surprisingly fun, and you can play it with friends in local multiplayer by passing the controller around. It’s a shame there’s no online to lift its longevity, but it’s a welcome distraction nonetheless.

Limited only by its truncated scope (and awful name) Voice Of Cards: The Isle Dragon Roars is a charming and likeable role-player in need of a more expansive sequel. With plenty of great ideas and a lively and engaging battle system, this is a promising first hand loaded with untapped potential.

In Short: A traditional turn-based role-player which utilises its tabletop disguise with charm and polish, but isn’t long enough to fully capitalise on its ideas.

Pros: Great battle system and the tabletop presentation is endearing and satisfying to navigate. Script and characters are enjoyable. Brilliant soundtrack.

Cons: As a role-player its short length limits its potential. The world can feel repetitive and thinly sketched. Main narrative is a little underwhelming.