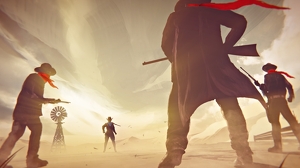 Cloudhead Games’ acclaimed VR rhythm FPS, Pistol Whip, will soon be slinging on a Stetson and saddling up for adventure in its Wild-West-themed Smoke & Thunder expansion – which is coming to Oculus Quest, PSVR, and PC VR devices this summer.

Smoke & Thunder brings a new five-stage narrative campaign – the second to be added to the game following last year’s retro-futuristic Pistol Whip 2089 – and tells the story of two sisters in a Wild West “where trains, tech, and explosions set the scene for some exciting surprises”.

When Cloudhoud previously teased Smoke & Thunder earlier this year, it promised new modifiers, weapons, and bosses alongside its new stages – although there’s regrettably none of that to be seen in the new teaser trailer below.