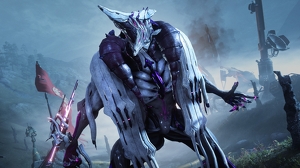 It’s a busy day for Warframe; not only is developer Digital Extremes poised to release the free-to-play sci-fi shooter’s latest update, Call of the Tempestarii, on all platforms today, 13th April, it’ll be launching its long-awaited Xbox Series X/S update, bringing parity with the recently enhanced PS5 version, at the same time.

Call of the Tempestarii – which comes to consoles in tandem with the Corpus Proxima and the New Railjack update recently seen on PC – introduces a brand-new story quest tied to Warframe Sevagoth and a still relatively mysterious Void Storm mechanic. However, it also aims to build on the groundwork laid in Corpus Proxima and the New Railjack, turning that update’s significantly streamlined, more accessible space combat into an experience better integrated with the game’s more traditional on-foot action.

Digital Extremes initially introduced Railjacks – essentially pilotable ships for use in deep space combat missions – back in 2019, but as chief operating office Sheldon Carter explains, it became increasingly clear significant portions of players simply weren’t engaging with the system. “What we had was the higher level you were, the hire Mastery Rank level you were, which is a way we measure the overall player progression, the more apt you were to have engaged and to be playing with that stuff. And the inverse relationship [was true], so we just felt like that wasn’t the goal for the system… it wasn’t supposed to be the end game system, it was supposed to be a system that everybody could engage with.”