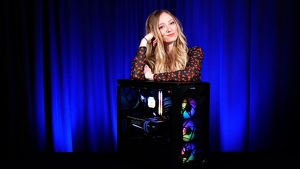 If you’re a regular over on the Eurogamer YouTube channel you might have noticed that Aoife, Ian and Zoe tend to stream console games a lot there – and often only the more basic PC titles, like Among Us. If you guessed this was because their PCs were getting a little long in the tooth, you’d be right. We were just thinking about speccing out upgrades when Intel handily offered to supply the team with brand new, cutting-edge builds based around their 11th generation CPUs.

There was just one catch: Aoife would need to build hers herself. On camera. Behold the results in the video below. Be aware that this video features some extremely festive rainbow-coloured LEDs.

This would be Aoife’s first PC build, but she’s ably assisted in the video by her other half Seb. (Hi Seb.) Spoilers: it goes OK! We showed the video to Digital Foundry’s Rich Leadbetter with some trepidation, but he gave it the thumbs up. As Aoife wrote on Slack: “I’m coming for your job Rich.”