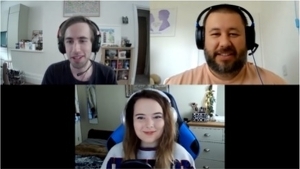 Another week, another set of attention-grabbing headlines in video games. Join Eurogamer news editor Tom Phillips, Eurogamer reporter Emma Kent and me in the video below as we run through the news that matters. Bong!

We start with the PlayStation 5's first big update, which comes five months after the console came out. This update finally lets you move games to USB storage – a feature the PS5 really should have had at launch. We chat about why this improvement is so important, but also discuss the state of the console itself as it approaches half a year out in the wild. Is the PS5 where it needs to be? Is it already playing catch-up in terms of features with Microsoft's Xbox Series X? And what do we want next from PS5?

Elsewhere, we chat about Nintendo's latest indie showcase (there's a lot of Fez talk, sorry!), before moving on to the ever-eventful world of Cyberpunk 2077. (Emma's report on what could be DLC for that game is well worth a read.) Can CD Projekt turn Cyberpunk around? The company has vowed to stick with it, at least.