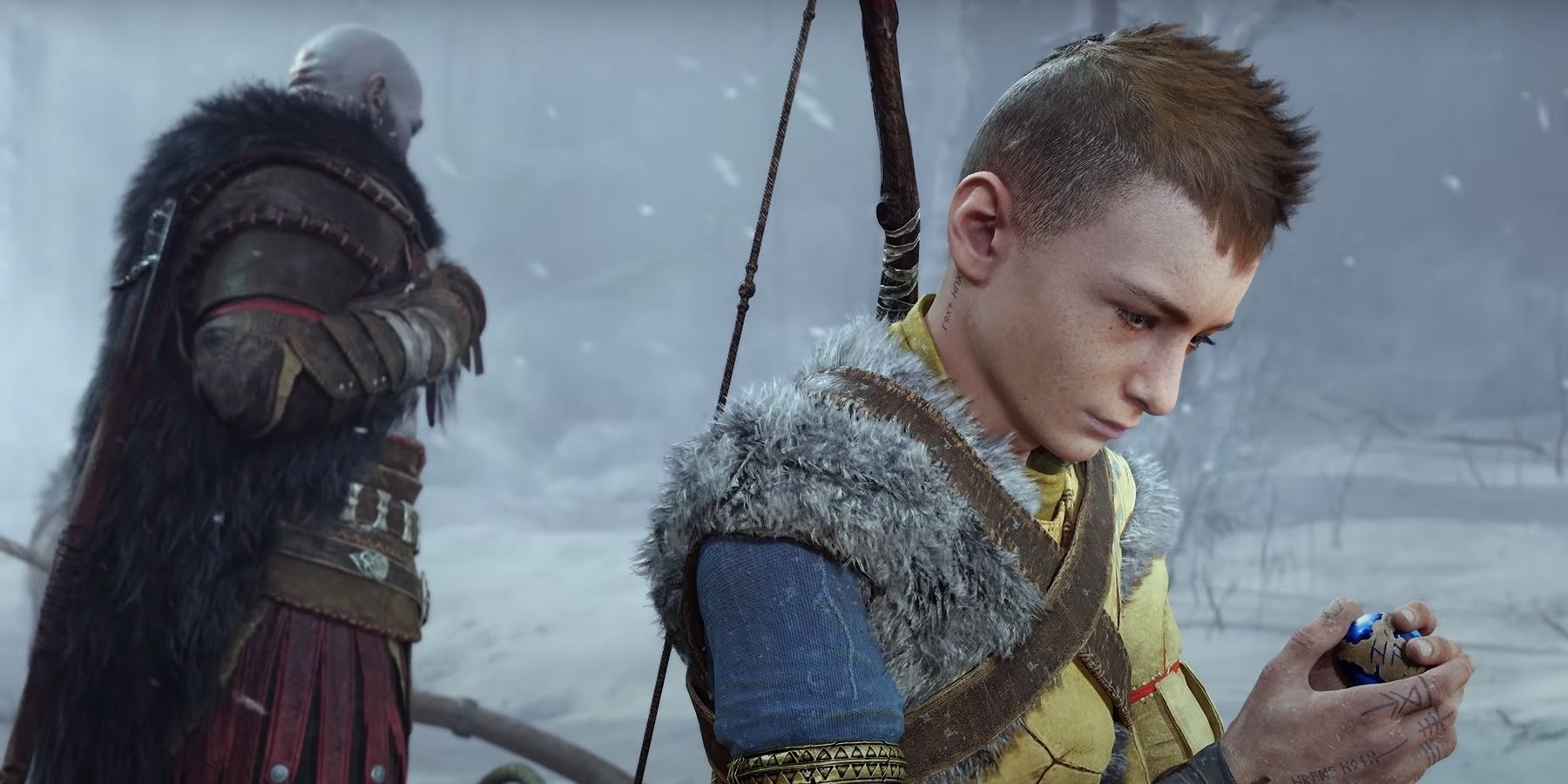 The God of War: Ragnarok reveal trailer showed fans that even after bonding on their way to Jotunheim and enduring three years of Fimbulwinter, Atreus and Kratos still haven’t found a way to resolve their differences—or their similarities. Atreus has entered his full-blown rebellious teenager phase and the father and son aren’t seeing eye to eye. Atreus is looking to rush back out into the world while Kratos is trying to hold him back, worried that he’ll start a war. Atreus is all for it, even requesting that Kratos start thinking like a general instead of a father.

One way or another, Ragnarok is coming and that means war is coming too. Kratos and Atreus are trying to stop Ragnarok, at least at the beginning of the game, but they won’t be successful. What remains to be seen is how much of a hand Kratos and Atreus play in starting the conflict with the Aesir. Kratos has already lost a daughter and two wives; he can’t lose Atreus too. Despite Kratos’ best efforts, God of War: Ragnarok will probably see Atreus make some impulsive decisions that lead to war with Asgard.

RELATED: God of War Ragnarok: What Norse Mythology Tells Us About Tyr

Atreus is Blinded By His Own Objective

In the God of War: Ragnarok trailer, Atreus is rushing into conflict because he wants to know who he is. God of War revealed that Atreus’ true name is Loki, a name that Norse mythology fans know has massive implications for his future. He claims that he doesn’t want to fight, but seems very okay with Kratos’ suggestion that his actions might lead to war with Asgard. It’s not exactly what you’d want to hear from your fourteen-year-old son.

A huge part of anyone’s teenage years is discovering who you are and what you want to do with your life. Even if Atreus wasn’t half-god and half-giant with a secret mythological identity, it would be normal for him to feel this way. But add in all those extra things, and it makes a lot of sense why Atreus is so determined to find out what his true place in the world is- especially when it’s so hard to get guidance from Kratos.

He’s still a kid, though, so he’s not thinking it through. All Atreus knows is that he can’t hide in the woods forever—which is true, but he lacks the maturity to sit Kratos down and reach a compromise where he can explore his identity without literally causing a war. Atreus has tunnel vision and isn’t considering the consequences of his actions; he wants the truth, and he’ll do whatever he needs to in order to find it. He’ll probably regret his impulsive actions later when they backfire, but nothing will stop him from pursuing his goal.

Kratos Hasn’t Shared the Horrors of War with Atreus

In God of War, Kratos shared with Atreus that he had killed his father Zeus. That deed clearly still haunts Kratos, but getting him to admit what he’d done to his son was like pulling teeth. Kratos opened up and shared bits and pieces of his past with his son, giving him a glimpse into the violent Spartan warrior he used to be, but Kratos is still far from an open book.

Kratos’ journey in God of War was about learning to acknowledge the past, accept it for what it is, and move on. He’s able to do that successfully for himself, but he doesn’t do the best job of passing the same skill onto his son. Kratos has committed some horribly violent acts, and he shared a small part of his past in the hopes that Atreus could learn to be better; however, there are still many things he kept in the dark.

Kratos’ violent actions in the past caused the death of many innocents. Not only did he kill his own father, but under the influence of Ares, Kratos killed his wife and daughter. He’s has seen how rage and war cause needless destruction, and he doesn’t want Atreus to be haunted by similar decisions. Instead of telling him the full story, however, he still holds much of his story close to his chest. Kratos hates that part of himself and is not about to make the same mistakes again by condoning a new war.

Sharing the full truth with Atreus doesn’t mean that Atreus would heed his warnings, but understanding the lifelong pain that war caused for his father might make him second-guess jumping into conflict. Kratos will probably tell Atreus more of his story in God of War: Ragnarok and that might help, but it’s unlikely to stop Atreus from making his own mistakes.

RELATED: It’s OK for God of War to End the Norse Storyline So Soon

Atreus Has Kratos’ Temper, But Not His Maturity

If nothing else, fans of the God of War franchise know that Kratos has a temper. The most recent God of War introduced players to a much different Kratos who has learned to control his temper, but it’s still there, simmering underneath the stoic facade. Kratos still has a Spartan Rage meter, after all, and Thor’s line in the God of War: Ragnarok reveal trailer suggesting that Kratos looks like a “calm and reasonable person” has become something of a joke among fans.

God of War made it crystal clear that Atreus inherited Kratos’ temper. As Atreus begins to learn of what he can do as a god, he discovers that he has powers closely resembling his father’s Spartan Rage. Atreus needlessly lashes out at several innocent characters and commits surprisingly violent acts as a result of his anger. Even though he shares Kratos’ temper, he hasn’t been sufficiently motivated to learn how to control it.

It took Kratos a long time to develop into the character he is now, and Atreus’ journey is only just beginning. Kratos is an older, seasoned warrior who has endured more than his fair share of tragedy and loss as a result of war. In contrast, Atreus is an impulsive teenager who knows very little about what the real world is like. Apart from his adventure in God of War, Atreus has led a pretty sheltered life. Because Atreus shares his father’s temper but shares none of the life experiences that taught Kratos how to control it, it makes perfect sense why Atreus is ready to rush into conflict while Kratos would rather handle things more delicately.