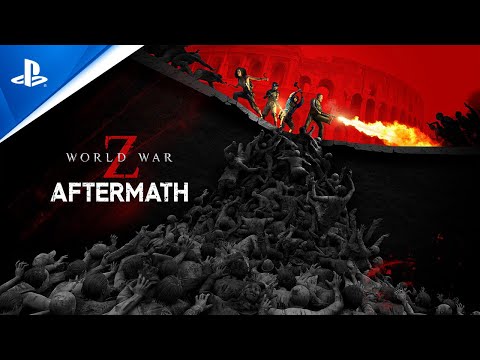 As horror enemies go, zombies are a little like Taco Bell: ubiquitous, comfortable, familiar, made up of a few ingredients that are endlessly reconfigurable and finally, more than likely to come back a second time and bite you on the ass. Like our beloved fast food chain, zombies have inspired a lot of questionable, if satisfying, late-night experiences. As most people know, World War Z — both the film and the book on which it was based — took the often lugubrious undead and made them highly mobile and added the spectacle of zombies rabidly attacking in swarms of hundreds or thousands at a pop.

World War Z — the videogame from 2019 — was a 4-person co-op shooter that did a decent job of translating the cast-of-a-thousand zombies film into game form. World War Z: Aftermath is essentially an expansion of the base game, though it goes beyond simply tacking on additional content. In addition to cleaning up some of the technical issues that plagued the original, it adds a new class, introduces a first-person mode, and, in the two new missions, a new enemy type.

Whether playing the original or Aftermath, World War Z is similar to both Left 4 Dead or the recent Aliens: Fireteam Elite (which was inspired by the co-op zombie shooter). Played alone, they’re all a bit like trying to raise a barn by yourself. Technically, it’s probably possible, but things go a lot better, faster and are more fun with other humans by your side. This may be even more true with Aftermath, because without the ability to communicate with your team, it’s almost impossible not to be overwhelmed. The game’s AI squadmates are competent when the enemy appears in small groups but just not quite up to the frequent big encounters that require specific, coordinated tactics for success. However, with actual humans by your side, World War Z Aftermath is still a lot of fun, and the two new episodes are interesting — if structurally familiar — and add a couple of hours of new content. One of the episodes is set in Rome and your task is clearing the Italian city and its catacombs of the zombie horde, while the other is built around bringing power to the survivors in Kamchatka, where the frigid winter temperatures add a bit of mechanical complication to gameplay, as you need to keep your body temp up by finding space heaters throughout the level. Bot of the three-mission episodes feature ever-escalating waves of enemies, and the need to escort and protect key NPCs. The new episodes are not dramatically different from those in the base game. Aftermath expands the roster of playable characters by four.

As a side note, although there are many ways to optimize the graphics on the PC version, some of the enhancements are tied to the Vulkan API and AMD cards and not directx. Some Nvidia/directx users have reported crashes when using the Vulkan API, but your mileage may vary. I stuck to directx and had no issues.

One of Aftermath’s new mechanics is the ability to play in first person mode. It’s an immersive way to experience the game to be sure, but it’s a bit disappointing that you can’t aim down the sights of your rifles, breaking both the sense of reality and the rules set by first person shooters decades ago. Had first person mode been fully implemented it might have been my go-to way of playing the game, but without aiming down sights, gunplay becomes much less precise….or, at least no more precise than in third person mode. Aftermath also introduces a new character class called Vanguard, which is a little more melee-focused and includes a shield that can be used both offensively and defensively. Anyone who has played the original World War Z probably knows that although the game has a progression of perks and upgrades for weapons and the now seven classes, it makes the most tactical sense to really focus on maximizing one class and its perks, versus spreading points around a lot of classes. With that in mind, the new episodes are probably more effective with a fully leveled class than starting over with the Vanguard, though if someone really vibes with the new class they can of course take the time to bring it to strength.

Finally, Aftermath doubles down on the swarm of enemies mechanic by tossing rats into the game, though the huge groups of rodents are more often an environmental obstacle than an aggressive enemy. Being trapped by the rats necessitates an assist from a squadmate in order to break free, while the little buggers continue to bite away. World War Z’s story was, and remains, a background element whose task is to move the player from episode to episode. Aftermath’s two new episodes are set in interesting environments, and the game’s additions and fixes will be welcome to those returning to World War Z as well as to those just starting out. The first person mechanic has potential but remains incomplete, and the new Vanguard likewise might appeal to those wanting to level a new class. Like the base game, Aftermath sans human players might not be a hard pass, but it isn’t the experience the developers intended. With some friends, or at least competent random homo sapiens, World War Z Aftermath provides a unique take on a familiar enemy and does a great job of translating the terror-inducing swarm of zombies mechanic from film to videogame.