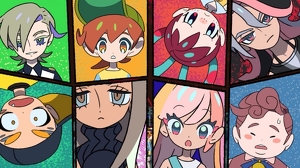 It's time to stop making excuses for myself – I care a lot about the rules of narrative, right until I obviously don't. Otherwise there's no way to explain my fascination with World's End Club and the many convenient excuses it makes for itself. While this is the first Too Kyo game both Zero Escape director Kotaro Uchikoshi and Danganronpa creator Kazutaka Kodaka have worked on together, Uchikoshi designed the scenario, and the story at least seems to bear his handwriting. World's End Club is reminiscent of Uchokoshi's approach to storytelling – he famously admitted to wanting to tell a story people remember, whether it's good or not.

Meet The Go-Getters Club, a grade school class of 11 children who are on their way to Kamakura near Tokyo for a school trip when a meteor strikes nearby. When they come to, the children leave pods (!) and find themselves in a theme park (!!!) underwater (!!!!) where a flying mascot called Pielope tells them they have to play a death game to make it out alive.

It's an important spoiler of sorts to note that the death game, once the driving force in the game's marketing, comprises the first half hour of nearly 20, so if you go in expecting another Danganronpa, this is a likely deliberate misdirect. Instead, upon their successful escape everyone wakes up in Kagoshima, on the other end of Japan has to discover that everything seems suspiciously quiet and unkempt, and that monsters are roaming the land. Unwilling to admit that this means what it usually means in videogames, the Go-Getters Club decides to walk across the country back home to Tokyo. When a game starts with grade schoolers facing off against each other in a battle royale, you can guess the rest isn't going to be a nice hike through the Japanese countryside, either. Ghosts, killer robots, aliens and cultists are just some of what you can expect in World's End Club, as the Go-Getters Club slowly uncovers what exactly took place during their absence.