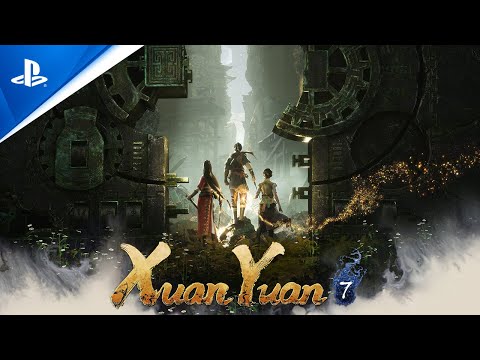 While most gamers, and even the non-gaming general public, know the big-name franchises like Grand Theft Auto or Final Fantasy, there are some storied series that are less familiar to audiences in the West but that have been around and popular for a very long time. One of those is the Xuan Yuan series of roleplaying games, first appearing over thirty years ago, but generally only appearing in Asian markets. Xuan Yuan Sword VII released on PC, Xbox, and PS4 in 2020 and now it is re-emerging on current gen systems and was the franchise’s first real attempt to court a more global audience.

Xuan Yuan Sword VII is a relatively linear, story-driven ARPG based on Chinese history, mythology and politics, but first and foremost it is an intimate family drama. It centers on Taishi Zhao who, when the story begins, is just a young boy. When his parents are about to be killed by apparent political insurrectionists, Taishi is forced to flee with his baby sister and become her caretaker. Years after the incident, his sister is sick, and Taishi has become a mercenary out of necessity in order to earn coin. While escorting a small group of troops into a forest haunted by supernatural happenings, the soldiers and nearby village are overtaken by monsters and Taishi’s sister is gravely wounded. In order to save her, Taishi calls upon his formerly hidden magical powers and with the help of an imprisoned deity, is able to preserve his sister’s soul in a doll while her soulless form remains animated. The rest of Xuan Yuan Sword VII is an extended quest to find the magical items that will allow his sister to become whole again. But, like all great quest stories, the main mission is not really the point, just the engine the powers it. While the vast majority of Western ARPGs often dive into their stories and action with little preamble, Xuan Yuan Sword VII takes a lot of time to establish the touching and genuine relationship between the protagonist and his sister, making clear the deep bond they share. Taishi Zhao sings his sister lullabies and tells her long, sprawling folk tales from ancient China. The opening hours of Xuan Yuan Sword VII might seem glacial to audiences expecting immediate action, but they set the tone and pace for the entire game, which is heavy with character, story, dialogue, and cinematics. It would not be incorrect to look at Xuan Yuan Sword VII as a lengthy interactive movie, a meditation on love and family, loss, Chinese politics, and justice. If you can adjust your expectations for action above all and relax into its particular pace, Xuan Yuan Sword VII contains some remarkably effective storytelling, unique because it takes its time and cares about its characters.

That isn’t to suggest that Xuan Yuan Sword VII does not have action or familiar ARPG mechanics, because it does, and they are well implemented and engaging. Taishi Zhao has a variety of melee and magic-enhanced weapons, attacks, defensive postures and special moves called stances, which he learns from defeating bosses. Like everything about Xuan Yuan Sword VII, the game introduces its fighting mechanics and enemies very gradually, and it will be several hours into the game before enemies become truly challenging. There is also an abstracted sort of city building aspect to the game, where the hero can build up his home base, Elysium, to give him access to additional upgrades. For a game on the precipice of being last gen, Xuan Yuan Sword VII looks very good and occasionally really impressive, with only some relatively low-res textures and figure models distracting from an otherwise great looking title. While some of the soldiers and enemies look a bit dated, the main characters are really beautifully and expressively represented in the game’s cut scenes. Most all dialogue is voiced, sort of astounding when you consider how much of it there is. At least in the English translation, Xuan Yuan Sword VII is well written, if occasionally a bit melodramatic. Which, I suppose, is in keeping with the overall tone of the story. The music is absolutely fantastic, combining Western and Asian instruments and moving between romance, drama and melancholy. If there’s a sticking point to really enjoying Xuan Yuan Sword VII, it’s that not everyone will respond to its pace and insistence on story and character over action. While its mythology, history and politics are firmly rooted in Chinese culture, this 20-hour family drama is moving, universal and entirely relatable, and its action is rewarding. For those with patience, Xuan Yuan Sword VII is a unique and memorable action roleplaying game experience.

***Xbox Series X code provided by the publisher for review***