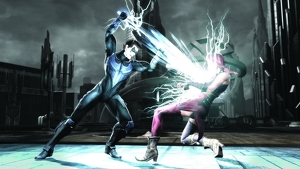 NetherRealm’s acclaimed DC Comics superhero fighter Injustice: Gods Among Us is currently free to download and keep on Xbox One, PlayStation 4, and PC.

Injustice: Gods Among Us might be an oldie – it originally released all the way back in 2013 and even saw in sequel in 2017 – but it’s still a goodie, taking Mortal Kombat developer NetherRealm’s flair for supremely visceral fighting action and transplanting it into a slightly more family friendly world of leotards and capes.

It features dozens of familiar faces from all across DC Comics’ iconic catalogue – including the likes of Superman, Wonder Woman, Batman, Catwoman, Flash, Green Arrow, Nightwing, and Aquaman – and some equally iconic locations, and then brings them all together into an effective story mode that blends boisterous multiverse action, ample 2.5D battling, and mini-games. There’s also Battle Mode, Versus Mode, Training Mode, challenges, and online play.