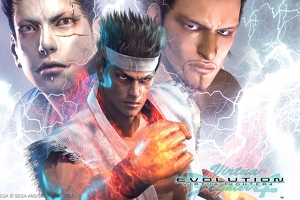 Editor’s note: After an outrageously long hiatus, Sega’s Virtua Fighter is back with the release of Ultimate Showdown on PlayStation this coming week. To celebrate, we’re republishing some older pieces on the series, starting with this Virtua Fighter 4 retrospective from 2013.

I was once told a great urban myth about Sega’s greatest visionary, Yu Suzuki, and one of his greatest games, Virtua Fighter. When Tomonobu Itagaki was designing the first Dead or Alive (which ran on Sega’s Model 2 hardware), he got Yu Suzuki drunk in an attempt to extract the secrets that made Virtua Fighter so glorious. The legend goes that the AM2 boss spilled the beans, but only half of them. Suzuki kept the most important info to himself and Dead or Alive’s fighting system was doomed to an eternal fourth-tier status below Sega and Namco’s 3D fighters, despite adhering to the three-button control mandate and a rock/paper/scissors structure that seemed to be Virtua Fighter’s key to excellence.

It’s clear that Virtua Fighter’s magic was always far more than eight directions, three buttons and an age-old tripartite rule structure. There’s magic in the distinctive, individual rhythms of its characters and the complexity that emerges when players are trying to commandeer the tempo of a fight. It’s in the lack of pyrotechnics and hyperbolic specials and the clarity of feedback this absence provides. It’s in the physicality of the models and the specific dynamics of Suzuki’s Virtua violence – and it’s all very much in the Yu Suzuki mould, where the term ‘Virtua’ has as much to do with creative virtuosity as it does virtual reality.