3D arena fighters and anime make an excellent pairing. How else do you recreate that high-speed action, those intense special moves, and that colorful visual style? Demon Slayer: The Hinokami Chronicles continues this grand tradition, with a couple of key differences in its execution. If you’re a fan of games like this, you’ll love The Hinokami Chronicles. On the other hand, if you’re looking for an entry point into the anime arena fighter field, this might still be up your alley.

Story Mode follows Tanjiro, a young swordsman on a quest to restore his sister’s humanity. If you merely play through the campaign, you’ll miss some critical context. Significant narrative scenes are buried in a series of optional cutscenes. On the other hand, you won’t be totally lost. The game simply assumes that you’re watching these extra scenes. You’re even incentivized to do so with minor rewards. Maybe they wanted to preserve the flow of gameplay, but it still feels a bit weird. The bits of narrative that you do see in the main campaign are dynamic and well-paced. I often find myself struggling to connect with the plot in anime games. Dialogue hits you like a tidal wave, threatening to drown you. The Hinokami Chronicles keeps things fresh with proper camera cuts and actual pacing. It’s quite refreshing!

Most of the action is wrapped up in the combat. As I mentioned previously, this is an arena fighter. You’ll be ripping around a massive space, dodging attacks and setting off fantastic specials. Fighting feels familiar enough to fall into place pretty quickly, though there are quick-time bits to try and keep things vibrant. It mostly works? You know you’ve won a given battle when you get prompted to press triangle or square at the right moment. The events are simple enough that it’s clear you’re meant to lean on your actual combat skills for victory. Which makes sense! Fights start out simple enough, but they build to a brutal plateau soon enough. 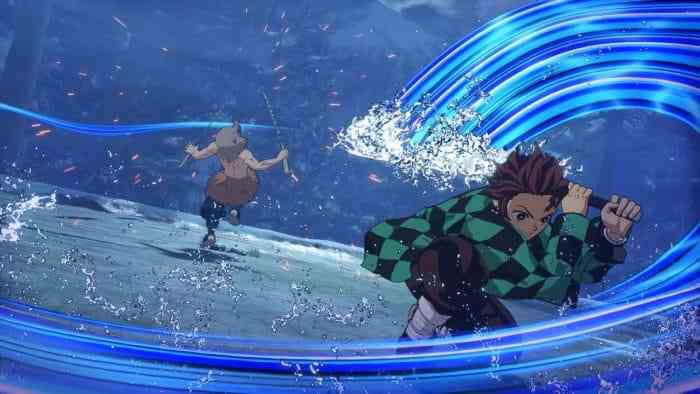 When you’re not fighting, you’re exploring. Unlike the battles, these sections feel a bit like filler. You’re just guiding Tanjiro or his comrades through a series of simple environments. There are items to find and side missions to complete, but they’re never complex or tough in the slightest. All I wanted was the ability to move through them faster, to get to the fighting as soon as possible. The only upside to these sections is their ability to flesh out the plot. If this is your first time experiencing this story, every scrap of story is essential.

Although I quickly grew impatient with the exploration sections, they’re at least technically well-crafted. Unlike some games, these character models are designed for more than just battle. Little touches like hand gestures, facial expressions, and reaction shots all make these scenes feel compelling. You still run into timing problems, little gaps where a reaction doesn’t follow an event fast enough, but that’s fine. This is a larger issue with cutscenes in games that we haven’t quite mastered yet. And if all this sitting, waiting, and watching isn’t your style, there’s a whole versus mode to play in.

Let’s Get To The Good Stuff Already

Unlike the story mode, versus is all combat, all the time. Which is perfect, right? No waiting around for the good stuff to start again. The problem is that a lot of the characters feel somewhat interchangeable. Everyone has different moves and fighting styles, yes. But once you’ve mastered light strikes, heavy moves, parries, dodges, and specials, that’s kind of it. You can move effortlessly from one fighter to the next, no hitches or learning curves to truly slow you down or trip you up. This is perfect for keeping things approachable, but at the cost of greater depth. But maybe that’s the point?

This is something I’ve always struggled with when it comes to 3D arena fighters. They don’t feel like proper fighting games, even though combat is what the focus is being poured into. But then again, they’re not exactly fighting games in the usual sense. Games like The Hinokami Chronicles are about feeling fast, powerful, and cool. It’s about piloting people like Tanjiro and Zenitsu, and seeing what their incredible strength can do. These are fighting games where you and a friend are panicking, shouting at one another as explosions and effects fill the entire screen. Within this framework, Demon Slayer -Kimetsu no Yaiba- The Hinokami Chronicles succeeds with flying colors. The exploration sections are somewhat dull, the fighters are interchangeable, and the story is told in a separate menu, but the parts that need to work, do. Combat is crazy, fast, and deeply satisfying. Whether this is your first 3D arena fighter or your fifteenth, The Hinokami Chronicles are a lot of fun.