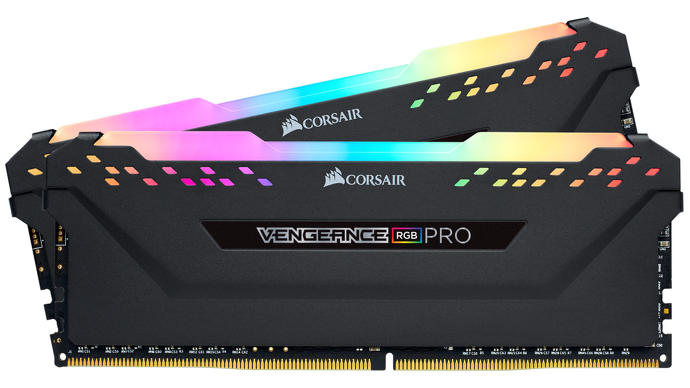 Way back in 2014, Corsair’s Dominator Platinum memory was some of the finest the industry had to offer – brand new DDR4, rated at speeds of up to 3300MHz and available in four-stick kits totalling a whopping 16GB… for only $900. Since then, capacities have gone up substantially, with 8GB and 16GB sticks now becoming commonplace, while prices have gone way down. Frequencies have also slowly ramped up over time, and in 2020, 3200MHz RAM is considered the baseline speed for even budget builds, with 3600MHz being a high performance option that doesn’t cost the earth. Today, we’re testing the next logical step – 4000MHz RAM – to see what further performance advantages we can find.

Today’s analysis centres around an Intel test platform, where we tested a 4000MHz RAM kit at frequencies from 3200MHz to 4000MHz in 200MHz increments at the kit’s rated CL19 timings. We also dipped our toes in the water of RAM overclocking, with results of a 4200MHz overclock, plus tightened CL16 timings from 3200MHz to 4000MHz. We also tested three RAM kits we had on hand at their XMP settings to see whether you can expect big changes between RAM from different manufacturers at the same rated speed. That’s fourteen different configurations altogether, which is why this testing did take some time to perform.

As usual, gaming will be our main focus, with three of our favourite titles tested, but we also snuck in some content creation workloads to see if higher frequency RAM or faster timings can make a difference in other scenarios too. We also wrote up a quick buyer’s guide to RAM, to give you some basic rules of thumb when you’re next building or upgrading a gaming PC.

For our testing, Corsair provided two 8GB sticks of their Vengeance RGB Pro DDR4-4000MHz RAM, with XMP 2.0 timings of 19-23-23-45 at 1.35V. (This kit currently retails for £180 in the UK and $185 in the US, but you can find cheaper dual-channel 16GB 4000MHz CL19 kits for around $110 / £115 if you’re not fussed about RGB lighting or a particular brand.) Taking a closer look, these particular sticks have a Corsair version number of 4.31, indicating they use Samsung B-Die memory chips. This was the RAM type of choice for early Ryzen enthusiasts due to the better performance it provided, and it should perform well on an Intel platform also. Of course, the inclusion of individually addressable RGB LEDs on the Corsair RGB Pro will provide a much-needed morale boost during the long testing period.

Let’s talk a little about methodology. Benchmarking is all about removing as many variables as possible to ensure your results are consistent. There will always be some run-to-run variance, especially when testing in-game frame-rates, but ideally this will be minimised to ensure your results are repeatable and representative. This is important for graphics card testing, but goes double for CPU testing where different ambient conditions or a relatively light task beginning in the background can drastically alter your results. RAM testing takes this to another level, given that we expect to see relatively minute performance gains as frequency slowly ramps up.

To give ourselves the best chance of getting meaningful results, we therefore disabled the normal boost behaviour on the 9900K in our test rig, locking it to its all-core turbo frequency of 4.7GHz with multi-core enhancement enabled to ensure that power limits never became an issue. Our AVX offset was set to 0, for the single AVX task in our planned workload, and CPU fan speed was locked to 100 per cent also to ensure temperatures didn’t cause the processor to throttle at any point.

Alongside the 9900K, we used relatively high-end components throughout, with a Gamer Storm Castle 240mm AiO, Asus Maximus XI Extreme motherboard and 1TB of fast NVMe storage from XPG. Our graphics card was our normal choice for CPU testing, the Nvidia GeForce RTX 2080 Ti Founders Edition.

With these elements in place, we’re ready to dive into the first part of our results: content creation testing. We’ll also look how each of our 14 configurations differ in terms of raw performance, thereby setting out some upper limits for our later gaming tests.

Testing 4000MHz RAM: Are higher frequencies worth it?