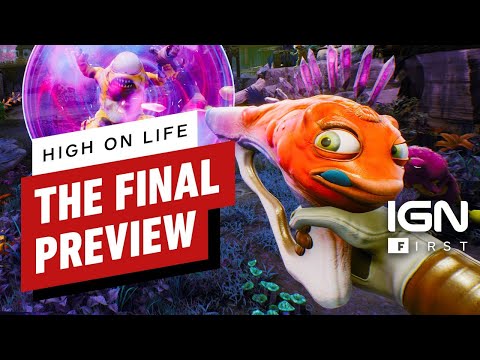 Colourful, bonkers shooter High on Life hits Xbox Game Pass in December, and we can say we’ve been pretty interested in this one ever since we heard its roster of talking weapons grace early gameplay clips. In a final video preview with IGN ahead of launch, we can see more of the game’s crazy world on show, and the team interjects a nugget of info that’s added to our excitement levels.

While we’re not sure exactly how long High on Life will take to complete, the developer was keen to stress to the outlet that the game will be ‘organically replayable’ thanks to its weapon pool. Each talking gun — of which there are four at launch — has bespoke dialogue, meaning that each level plays quite differently depending on which weapon you have equipped. Here’s the video preview:

Elsewhere in the clip, IGN notes how “vibrant and delightful” High on Life’s levels are, making a particular point that the game is a great change of pace from your typical first-person shooter. At this point we’ve heard enough to be honest, we just want to try it out ourselves!

“Fresh out of high school with no job and no ambition, you’ve really got nothing going for you until an alien cartel that wants to get high off humanity invades Earth. Now, you and a team of charismatic talking guns must answer the hero’s call and become the deadliest intergalactic bounty hunter the cosmos has ever seen.”

Can you see yourself playing through High on Life more than once? Let us know your thoughts on this preview below.