This new design measures a whopping 14 inches in length, and its triple slot design takes cues from Nvidia’s current RTX 3080 Ti. This product most definitely seems to be Nvidia’s creation as there are no red accents on the edges to indicate that this is one of AMD’s current triple slot graphic cards. These images also seem to hint toward one PCIe gen 5.0 connector that newer technologies tend to use. Here is a close up look at the allegedly leak Graphic Card. 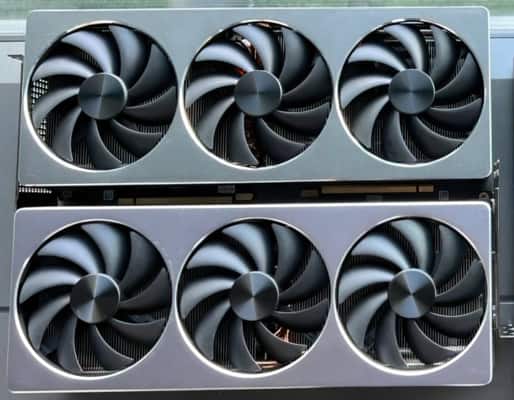 The card is packed with a triple-fan cooling system that pushes the air through the heatsink, and its enormous size means that it fits the entire length of Lenovo’s gaming PC case. Since the PCB uses a well-fitted small design, the third fan is responsible for removing air from the backplate’s cutout.

The leaker went the extra mile and shared images of the heatsink and all 13 heat pipes that this graphic card makes use of to stay cool and at its highest gaming capability. The giant cold plate could be this card’s vapor chamber which is a necessity in a powerhouse promising the level of performance this card does.

The RTX 4090 is expected to come with specs bringing 16,384 CUDA cores and boasting a clock within the range of 2.0-3.0 GHz. This feat seems quite likely with its rumored 24 GB GDDR6X memory clocked at 21Gbps speed providing a bandwidth of up to 1TB/s. It is expected that this graphical power will come with an expected 450W load, but TGP might end up lower than that.

The Nvidia Geforce RTX 4090 is expected to launch this year on October 22 and will likely be unveiled at Nvidia’s GTC keynote sometime this month.