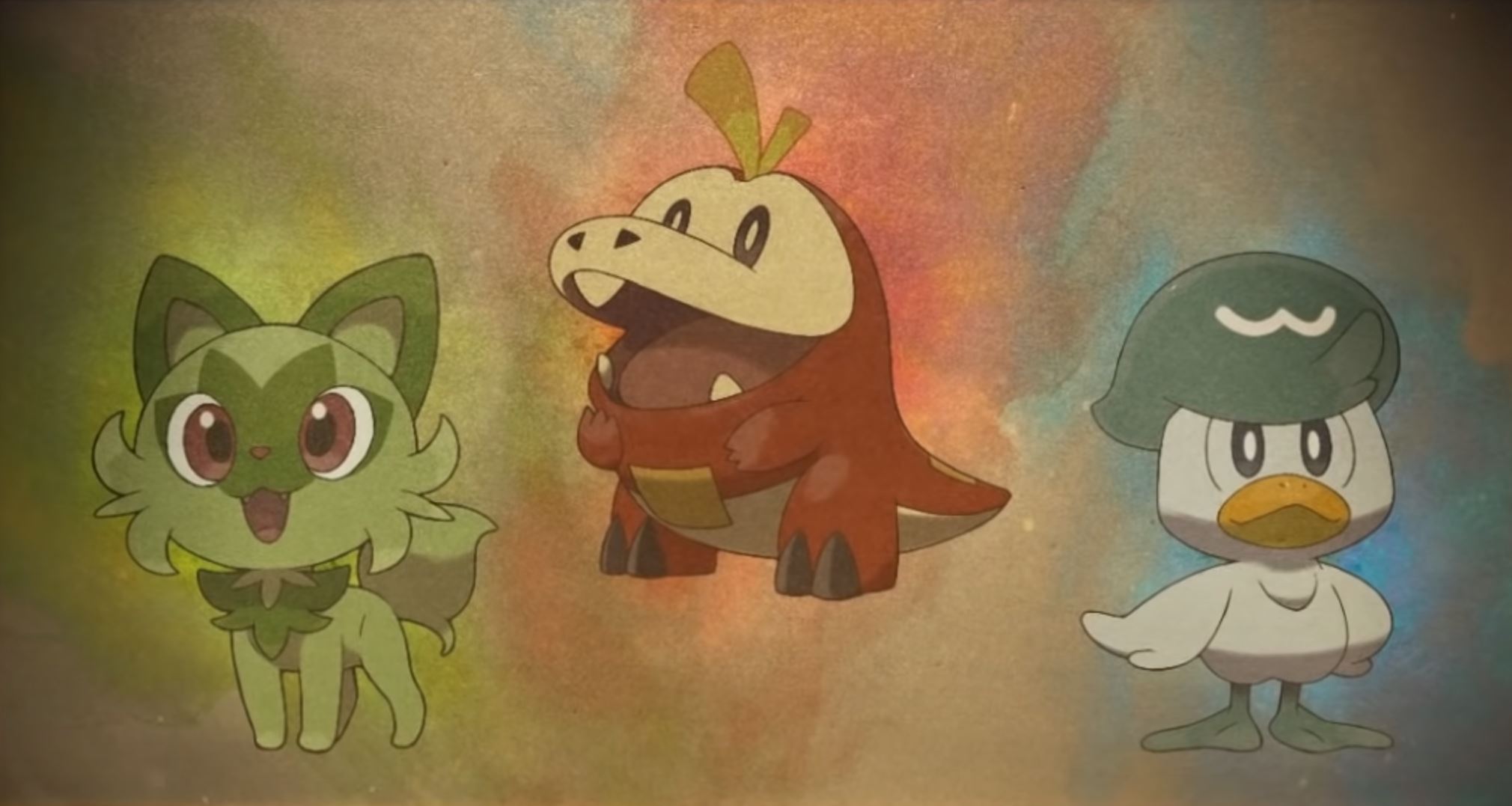 While virtually every gamer predicted that Nintendo and Game Freak would unleash spectacular announcements during Pokémon Day (February 27th), nobody expected the companies to reveal a new mainline Pokémon game. Few also expected to immediately fall in love with the game’s new starters, but will that love last?

While the trailer for Pokémon Scarlet and Violet showed off and teased many exciting new features, its highlight was arguably the introduction of the series’ new starter Pokémon. Almost everyone who tuned in was quickly enraptured by the new grass cat Sprigatito, the fire croc Fuecoco, and the Donald Duck-lookalike Quaxly. These new Pokémon have spawned a ton of fan art, and gamers are already discussing which one they will pick when the new Pokémon game launches later this year (hopefully).

However, despite all the love, we actually know relatively little about these starters. While the creatures definitely have our attention, we have no idea what they’ll actually offer when these games are released. However, if those starters can satisfy some of the following conditions (which are based on the hopes of Pokémon fans around the internet as well as some of our own requests), then they stand a decent chance of justifying the sudden hype.

Pokémon come in a wide variety of shapes and sizes. However, far too many starter evolutions eventually gravitate towards a humanoid body type, which is already a concern for many early adopters of Sprigatito.

Before Gen 6, one starter per mainline game was quadrupedal and stayed that way throughout its evolutionary line. However, beginning with Pokémon X and Y, every final evolution became bipedal. Fennekin and Litten are the unfortunate faces of this trend, as even though those Pokémon start on four legs, their final evolutions, Delphox and Incineroar, stand up straight on two. Countless players are comparing Sprigatito to Litten since they are both kitten-like starter Pokémon (some have gone so far as to call Sprigatito “grass Litten”) and because they are afraid Sprigatito will take after Litten and eventually sport a bipedal evolution.

Many Pokémon players want Sprigatito to stay a four-legged cat, and it’s hard to disagree with them given the recent lack of body variety in starters. A quadrupedal final form for Sprigatito would insert some much-needed diversity in the starter roster.

Starters are usually mono-Grass, mono-Fire, and mono-Water until they evolve. While some stay only one type throughout, others adopt an additional element to create a dual-typing that usually isn’t copied in subsequent entries. Fire-type starters are too often the unfortunate exception to that tradition, though, and many gamers hope history doesn’t repeat itself when it comes to Fuecoco.

Even though Game Freak seemingly loves to make Fire-type starters evolve into Fire/Fighting Pokémon, quite a few fans simply don’t want another one. Many have already started speculating about Fuecoco’s final form, and some even hope that it’s either Fire/Grass or Fire/Ghost. Given past reactions to the inordinate number of Fire/Fighting starters, it’s not unreasonable to suggest that many might turn their back one Fuecoco if one of its evolutions adopts the Fighting-type designation.

At first glance, the starters of each mainline Pokémon game share little in common save their elementals. What connects the rabbit-like Pokémon Scorbunny to the salamander-like Charmander aside from their affinity for fire? According to a popular fan theory, though, each elemental line of starters is based on a different, franchise-wide theme, which raises the questions regarding whether Sprigatito, Fuecoco, and Quaxly will abandon that unofficial trend.

When you look at each starter Pokémon on their own, you notice their surface-level inspirations, but several fans believe the connections go much deeper. Some have even made a strong argument that the Grass, Fire, and Water-type starters draw from extinct creatures, Chinese Zodiac animals, and weapons, respectively. For instance, Decidueye is commonly believed to be based on the extinct Stilt Owl, while Chesnaught is more obviously inspired by the glyptodon. Blaziken and Emboar, meanwhile, are clearly based on a fiery rooster and pig, both of which are Chinese Zodiac animals. Water-type connections are historically a bit more tenuous, but it’s hard not to see that while Greninja and Inteleon are fantastic frogs and chameleons, they also resemble shurikens and sniper rifles, respectively.

A prevalent theory among Pokémon fans is that Sprigatito, Fuecoco, and Quaxly are based on the Iberian lynx, a pepper/crocodile, and a duck sailor, respectively. While the Iberian lynx is certainly endangered, it isn’t extinct, and crocodiles are nowhere on the Chinese Zodiac chart. Due to these discrepancies, some gamers are concerned these starters will break from the unwritten tradition, but to be fair, we have only seen those Pokémon’s first forms. Sprigatito has plenty of time to mimic an ancient animal (smilodon seems like an obvious choice), and if Fuecoco is truly inspired by a pepper, then it could easily become snake-like (snakes are, after all, a Chinese Zodiac animal). As for Quaxly…well, sailors have a wide variety of weapons to choose from, so it could evolve into a Pokémon designed to resemble a cutlass, blunderbuss, or any other popular naval armament. Alternatively, maybe the patterns were nothing more than the result of gamer apophenia, and these upcoming starters will debunk that fan theory. Still, here’s hoping they don’t.

While many gamers complain about all the Fire/Fighting-type starters, those Pokémon hold a dark secret: they are the only Fire/Fighting creatures in the franchise. Likewise, Empoleon is the series’ sole Water/Steel-type, and Torterra is the only Grass/Ground-type Pokémon. Since this franchise still has so many type combinations that either remain unexplored or relatively scarce, why not let Pokémon Scarlet and Violet offer some of those combos through its starters?

Fuecoco might as well be the face of potential unique typings since, as, even though it is a Fire-type, it is shaped like a pepper, which invites a few fascinating thematic possibilities. Since peppers are plants, Fuecoco could evolve into the franchise’s first Fire/Grass-type, or maybe it could even become a Fire/Ice-type, which doesn’t exist outside of Galarian Darmanitan’s Zen Mode. Why Ice? Because of the wordplay associated with chili peppers, naturally. Alternatively, Fuecoco could turn into another Fire/Ghost-type, because…well, ghost peppers are a thing.

Pokémon is also full of dual-typings that Sprigatito and Quaxly could utilize. While Grass and Water-types have been paired up with every other element in the franchise, some combinations are still rarer than others. For instance, only three Pokémon are Grass/Steel, which is a combo that could work well with a hypothetical Smilodon evolution for Sprigatito. Grass/Electric and Grass/Ice-types would also work nicely since Smilodons were presumably quite fast and lived during the Ice Age.

Quaxly could also evolve into a variety of unusual elemental combinations, especially if they take advantage of the Pokémon’s apparent sailor theme. Quaxly’s final evolution could even take after Empoleon and be the franchise’s second Water/Steel-type. For that matter, maybe it could hang a hard left into the pirate theme and become a Water/Ghost. Only Basculegion and the Frillish line sport that combination, so it’s certainly ready for more entries.

Granted, these ideas are only hypothetical and wishful thinking, but then again, most players probably forget Game Freak never created a Fire/Poison-type Pokémon before Pokémon Sun and Moon introduced Salandit and Salazzle. As such, it’s never too early to start speculating about (and perhaps even rooting for) more interesting combinations that we won’t be able to properly judge until someone take a chance on them.