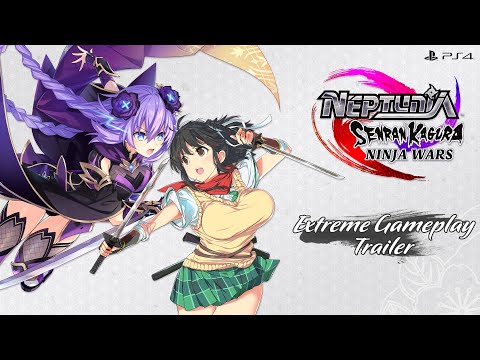 The trailer shows plenty of gameplay, but if you want to see more, you can also check out a livestream broadcasted yesterday night by Idea Factory.

This should be plenty to carry you over to the western release in a few days.

Neptunia x Senran Kagura: Ninja Wars will launch in North America on October 26 and in Europe on October 29, exclusively for PS4.

The game is a crossover between the Hyperdimension Neptunia series and Senran Kagura, finally bringing the latter back to consoles.

Gamninjustri – a place where all manner of ninjas gather.​ As the struggle for control increased between the Daimyos of the nations, tensions rose between the two great nations, each of which was home to one of the major schools of martial arts.​

The two camps were stuck in a ruthless competition of skill in order to achieve hegemony, but as they fought on, a mysterious army of mechanical ninjas made their assault.​

The mechanical ninja army overran the smaller nations in an instant, and the Steeme Legion leader, Yoh Gamer, made an announcement to the world:​ ​ “The Super NINJA War to decide the world’s strongest school is about to begin!”