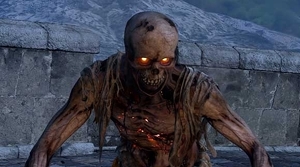 Zombies have been crawling around in Verdansk since February, but now it seems some players may be joining the ranks – as new radiation zones are transforming players into the undead.

According to the official lore explainer, radiation levels on the map yesterday reached "100 per cent", and nuclear zones are now appearing around the Vodianoy shipwreck and the Prison. For now these seem to be the only two areas affected, but I wouldn't be surprised if we saw this spread to other corners of Verdansk.

The radiation zones slowly do damage to players – although a gas mask provides decent protection (and you can also just run around picking up stims, apparently). Those who die in these zones are then transformed into zombies, and sent back into Verdansk to wreak havoc. Unless you're playing in solo mode, as then you just get sent to the Gulag.