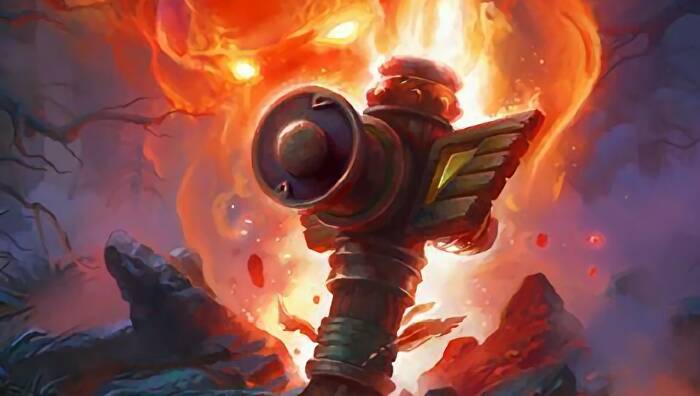 Aggro Shaman is all about burning an opponent down faster than they can get on their feet. It’s all about damage and damage fast. If the game drags on, you are likely to run into some issues, but if you want to play fast and furiously, there aren’t many better ways to do it than Aggro Shaman.

Aggro Shaman has some wonderful tools for causing damage fast, casting powerful spells early, thanks to Shaman’s Overload mechanic. You can play something disproportionately powerful to other classes but having to pay for it a little later. However, if later never comes, your opponents will be under immense pressure.

The current version of the deck tearing up the meta is a variant of the Elemental Shaman list. However, it diverges from that more mid-range dek, with a more spell and damage focused approach. Based around Thrall’s own Doomhammer, this is the most Shaman-like Shaman deck out there right now.

Here is the currenty Aggro Shaman deck just before the launch of United in Stormwind:

Select and copy the long ID string below, then create a deck in Hearthstone to export this deck into your game.

his is not a particularly complicated deck, but it is deeply effective. You are going to of course respond to your opponent’s plays, but the general idea is to use damage as much as possible to either go straight for their face or to kill their minions without them ever having a stable hold of the board.

The deck has synergies built-in, and fairly easy to consider win-conditions. Your plays from game to game won’t vary too much, but you do need to be verstaile, and wise enough to decide if there is more value in attacking a player directly or killing their threats first. If you are looking for something fast and furious though, this deck is for you.

Early game: The early game is not that complex. If you get a Kindling Elemental or Wailing Vapor on turn one, you are in good shape. If you don’t have a Doomhammer in hand, a Cagematch Custodian is also a great way to garuntee the weapon you’ll be searching for. However, try to play as many elementals as possible as several mid-game Elementals benefit from Elementals being played in the previous turn.

Mid game: This will largely depend on what the game is looking like. Gyreworm and Arid Stormer are great options if you played an Elemental on turn two. If you haven’t played one yet, a Diligent Notetake, as well as Marshspawn, will help you later on as you start to move into your spell heavy late game. Just keep applying damage and dealing with threats as best you can with Torrent and Hex..

Late game: Doomhammer. That’s your priority win-condition. Its versatile amount of uses and Windfury make it a stellar way to close out a game. Once you have the weapon, you can start stacking spells like Stormstrike and Rockbiter Weapon which will synergise with Doomhammer’s Windfury. It will not be hard to start doing 10 damage just with Doomhammer alone. However, if you can’t find Doomhammer, Inara Stormcrash achieves the same goal.

If you find yourself in turn seven or eight, Instructor Fireheart is a great late gameplay. Play here when you have a lot of excess mana to continue to play spells in one turn. She will help you close out a game if you need just a little more juice.

These tips will give you an advantage over the aggro opponents you come up against:

Consider these tips and tricks when facing control decks:

Save up to 40% on your Hearthstone card packs with
Amazon Coins.

You get cheaper cards while also supporting the continued development of Metabomb.
Our Amazon Coins guide has more detail.

These are the card you’ll want to get in your opening hand when playing Aggro Shaman:

These are the card combos you need to be aware of when playing this deck:

– If possible save Stormstrike and Rockbiter Weapon until you have Doomhammer or Inara Stormcrash on the field. Because your character will have Windfury, you will be able to hit for double damage. This can get out of hand for your opponent, fast.

– Several cards in this deck have special activators if you’ve played an elemental card in the previous turn. Make sure you are getting the most out of Arid Stormer, Gyreworm and Lilypad Lurker by playing elementals. It turns them from decent standalone cards to superpowered ones that can help you out of sticky situations. This is why the first three turns are so important.

– Try to activate Dunk Tank by playing a Doomhammer or Inara Stormcrash while it’s in your hand. Its sweeping ability is really strong once activated. Hitting the face or a particular big creature for four and then dealing two more to all enemy minions (including the same minion if you used the initial four on it.)

– You don’t have to deal damage constantly. Instead, if you feel like you have time, stacking several spells in your hand for later use is a very strong finishing move. Because the curve is so nice on the deck, you often can save a lot of removal for later on. You can find later in the game that you have double-digit damage available to you for very cheap to close out a game.

– Don’t sleep on Arid Stormer. If you can activate its Battlecry, its Rush and Windfury ability make him very versatile. It can be used for instant minion removal or you can use Whack-A-Gnoll or a Strength totem to add extra attack damage to it. This allows you to do ever-increasing damage with the Windfury ability.

– Instructor Fireheart is a three-cost minion but is she is much better as a finisher. Saving her for turn eight or nine will let you cascade three to four spells to help you close out the game

Aggro Shaman is a relatively cheap deck and lots of its components come with the given Shaman deck. However, if you find you are missing some specific cards, here are some suitable substitutions.