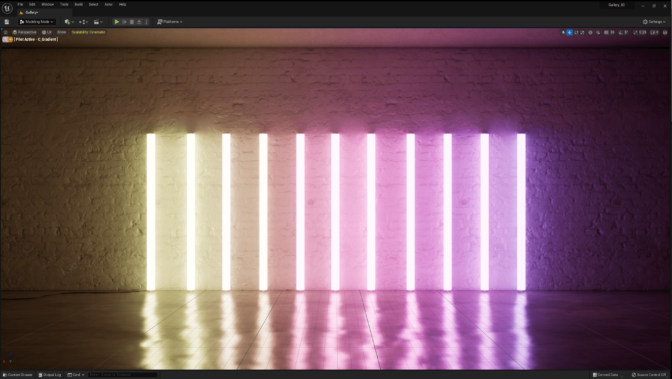 Editor’s note: This post is part of our weekly In the NVIDIA Studio series, which celebrates featured artists, offers creative tips and tricks, and demonstrates how NVIDIA Studio technology accelerates creative workflows.

This week In the NVIDIA Studio, we’re launching the April NVIDIA Studio Driver with optimizations for the most popular 3D apps, including Unreal Engine 5, Cinema4D and Chaos Vantage. The driver also supports new NVIDIA Omniverse Connectors from Blender and Redshift.

These updates are part of the NVIDIA Studio advantage: dramatically accelerated 3D creative workflows that are essential to this week’s featured In the NVIDIA Studio creator, Andrew Averkin, lead 3D environment artist at NVIDIA.

The April NVIDIA Studio Driver supports many of the latest creative app updates, starting with the highly anticipated launch of Unreal Engine 5.

NVIDIA has collaborated with Epic Games to integrate a host of key RTX technologies with Unreal Engine 5. These plugins are also available on the Unreal Engine Marketplace. RTX-accelerated ray tracing and NVIDIA DLSS in the viewport make iterating on and refining new ideas simpler and faster. For the finished product, those same technologies power beautifully ray-traced graphics while AI enables higher frame rates.

With NVIDIA Reflex — a standard feature in UE5 that does not require a separate plugin or download — PC games running on RTX GPUs experience unimaginably low latency.

In the time it took to render “The City” scene with an NVIDIA GeForce RTX 3090 GPU, the CPU alone took an hour longer!

Blender and Redshift have added hydra-based rendering. Artists can now use their renderer of choice within the viewport of all Omniverse apps.

April also brings a new Lenovo mobile workstation to the NVIDIA Studio lineup, plus the availability of three more.

The Lenovo ThinkPad P1 features a thin and light design, 16-inch panel and impressive performance powered by GeForce RTX and NVIDIA RTX professional graphics, equipped with up to the new NVIDIA RTX A5500 Laptop GPU.

Studio laptops from other partners include the recently announced Asus ProArt Studiobook 16, MSI Creator Pro Z16 and Z17, all now available for purchase.

Averkin leads with empathy, a critical component of his flow state, saying he aims to create “artwork that combines warm feelings that fuel my passion and artistic determination.”

He created the piece below, called When We Were Kids, using the NVIDIA Omniverse Create app and Autodesk 3ds Max, accelerated by an NVIDIA RTX A6000 GPU.

Here, Averkin harkens back to the pre-digital days of playing with toys and letting one’s imagination do the work.

Averkin first modeled When We Were Kids in Autodesk 3ds Max.

Averkin then brought When We Were Kids into Omniverse Create to light, simulate and render his 3D scene in real time.

Omniverse allows 3D artists, like Averkin, to connect their favorite design tools to a single scene and simultaneously create and edit between the apps. The “Getting Started in NVIDIA Omniverse” series on the NVIDIA Studio YouTube channel is a great place to learn more.

“Most of the assets were taken from the Epic marketplace,” Averkin said. “My main goal was in playing with lighting scenarios, composition and moods.”

In Omniverse Create, Averkin used specialized lighting tools for his artwork, updating the original Autodesk 3ds Max file automatically with no need for messy and time-consuming file conversions and uploads, concluding with final files rendered at lightspeed with his RTX GPU.

Dive Deeper In the NVIDIA Studio

Tons of resources are available to creators who want to learn more about the apps used by this week’s featured artist, and how RTX and GeForce RTX GPUs help accelerate creative workflows.

Take a behind-the-scenes look at The Storyteller, built in Omniverse and showcasing a stunning, photorealistic retro-style writer’s room.

Check out this tutorial from 3D artist Sir Wade Neistadt, who shows how to bring multi-app workflows into Omniverse using USD files, setting up Nucleus for live-linking tools.