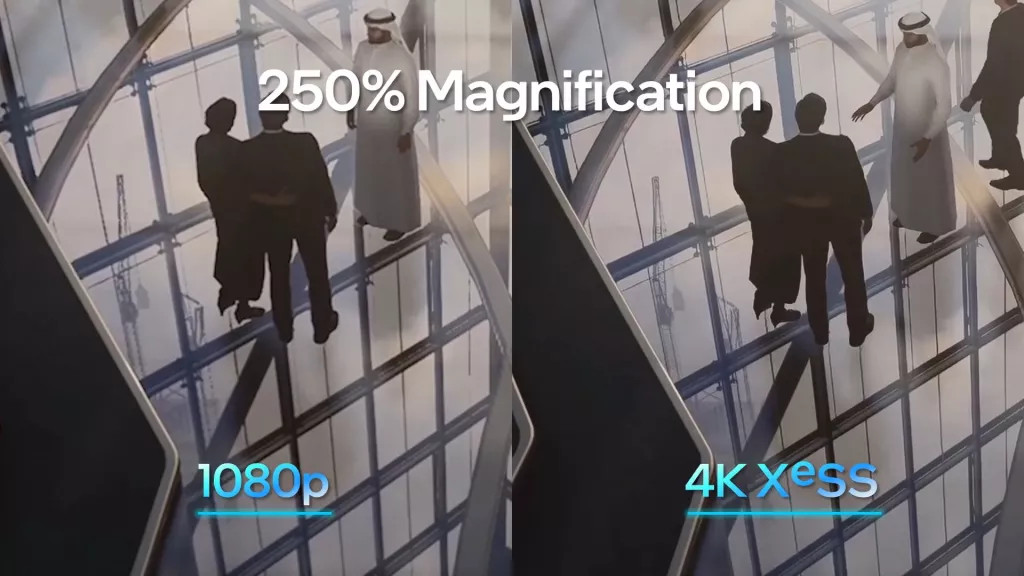 Intel has been showing off its XeSS feature, which is Team Blue’s equivalent to Nvidia DLSS, releasing some footage of a couple of games using the upscaling tech – namely Hitman 3 and The Riftbreaker.

At Intel’s recent Innovation event, the company confirmed further details about its incoming Arc Alchemist desktop GPU – which will indeed run with 512 EUs (Execution Units) and 32 Xe Cores – and as Tom’s Hardware spotted, Intel has also shared video footage of the above games with illustrative comparisons of XeSS upscaling.

The catch is that the clips are uploaded in 1080p – Intel will apparently provide proper 4K resolution videos at a later date, though – and the comparative images shown are native 1080p contrasted with XeSS-powered 4K.

Obviously we do need to bear in mind that Intel’s own showcases will be designed to make the tech look good, but still – the results are seemingly impressive on the face of it.

As well as these promising glimpses of how XeSS is shaping up nicely in these pre-release days, there’s a further sign that Intel is serious about ramping up this supersampling tech with the creation of the XeSS DevMesh program.

This is a way of giving devs a chance to submit their interest for incorporating XeSS within their games, preparing the ground for developers to get up and running with the tech sooner rather than later.

Analysis: XeSS success is in the cards, perhaps?

It’s clear enough that XeSS looks promising, then, and efforts to get devs into the mix and using the upscaling tech are of course welcome.

What’s perhaps most exciting about XeSS is that – in theory – it’s kind of taking the best of both worlds when you compare to rivals Nvidia DLSS and AMD FSR. Namely that it’s an open standard like the latter, and not a proprietary (closed) affair like Nvidia’s effort, but crucially, XeSS is AI-powered like DLSS, whereas FSR isn’t, and machine learning (AI) isn’t involved with AMD’s software-based upscaling trickery (though note that Team Red’s goal is to achieve something which plays nice across all hardware and even older graphics cards, a rather different angle).

In short, the hope is that XeSS could end up a potent blend that boasts AI upscaling results that compare with DLSS 2.0, the much-improved second-gen of Nvidia’s tech, while keeping the openness that AMD offers (and not just running on Intel’s own GPUs, but also AMD and Nvidia – although it’ll run better on Team Blue’s graphics cards, naturally). The operative word here is could, of course, and we don’t really know how this third upscaling horse will actually pan out in reality. Time will tell.

These early glimpses seemingly offer plenty to be optimistic about, and the fact that XeSS is already up and running in a big-name title like Hitman 3 is a good sign, along with that early access scheme to get more devs involved.