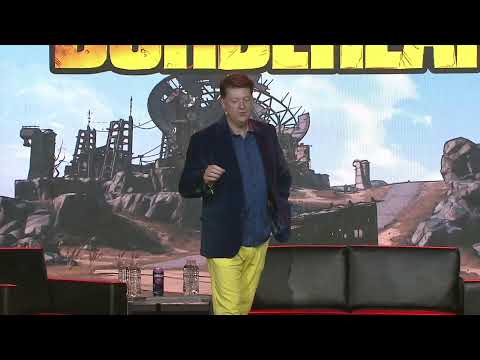 Gearbox has announced a follow-up to its episodic adventure game Tales From The Borderlands, but with an all-new cast.

To close out Gearbox Software’s show at PAX East, the company’s president and CEO Randy Pitchford took to the stage to announce that a new Tales From The Borderlands is in development.

A proper reveal will take place in the summer, but Pitchford did confirm a few key details. Namely that it will release by the end of the year and that it will feature a whole new cast of characters, rather than focus on the cast of the previous game.

A promotional image depicting three silhouettes was also shown. These are likely the game’s new main characters, although it’s unclear whether the shift in focus means this will be called Tales From The Borderlands 2 or not.

The most important detail is that Telltale Games isn’t involved with the project, despite developing the first game. Instead, this second Tales From The Borderlands is being made in-house at Gearbox.

No reason was given as to why Telltale isn’t involved, although the studio is currently busy with The Wolf Among Us 2 and a game based on sci-fi show The Expanse.

One of the things that led to Telltale’s initial closure was that it took on too many projects at once. Since it swore not to repeat the same mistakes after the studio was revived, that might be the explanation.

Pitchford didn’t name any release platforms for the Tales From The Borderlands or say whether it will release episodically, like the first one, or go the Life Is Strange: True Colors route and release as a full game.

If only all sequels could be as good as Moss: Book 2 – Reader’s Feature

While that was undoubtedly the biggest news to come out of Gearbox’s show, the company did have other announcements. For instance, it will be buying out Lost Boys Interactive, the support studio that assisted with development on Tiny Tina’s Wonderlands.

If you only care about the Tales From The Borderlands announcement, you can see it in the video below from the 1:15:21 mark.