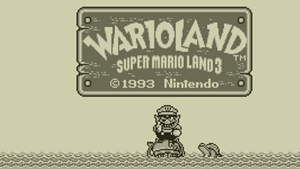 Is there a game you can play with your eyes closed? Besides a brief time when I fell asleep playing Mario Kart DS but woke up still in first place, my 'eyes closed' game of choice is Wario Land, also known as Super Mario Land 3, on the Nintendo Gameboy. Not that, obviously, I ever do play it with my eyes closed, but I'm fairly confident I could if need be (or for a bet). Back in the mid-1990s, it was one of the first games I ever completed and it blew my mind at the time. Sure, I loved Super Mario Land, but this was different – Wario was mean! It made a change to play as the bad guy rather than as the unlikely hero trying to rescue a princess or as a blue hedgehog saving trapped animals. Who wants to do all that when you can profit instead? That was one of the driving forces behind why I loved Wario Land.

The concept was a simple one. You play Wario, Mario's arch-rival, and you're homeless, having been kicked out of Mario's castle at the end of Super Mario Land 2: 6 Golden Coins. All you want and need is a new home to call your own. To get this, you need to collect as many coins and as much treasure as possible. Because Wario is a bitter sort, a humble two bedroom terrace isn't good enough for him. No, he wants a mansion or castle that's far superior to anything Mario could possess. Keeping up with the Mario Brothers? Capitalism gone crazy? Yup, all of those. Greed is very, very good here.

In 2D form, Wario was a fair bit chunkier than Mario. Maybe it was a reflection on how baddies generally are a bit more brash and cumbersome looking than the good guys? Who knows. All I know is it meant the game looked great on the Gameboy's small screen with Wario and his enemies all looking suitably chunky and well animated. Even now, it looks delightful in its dot matrix-y way.