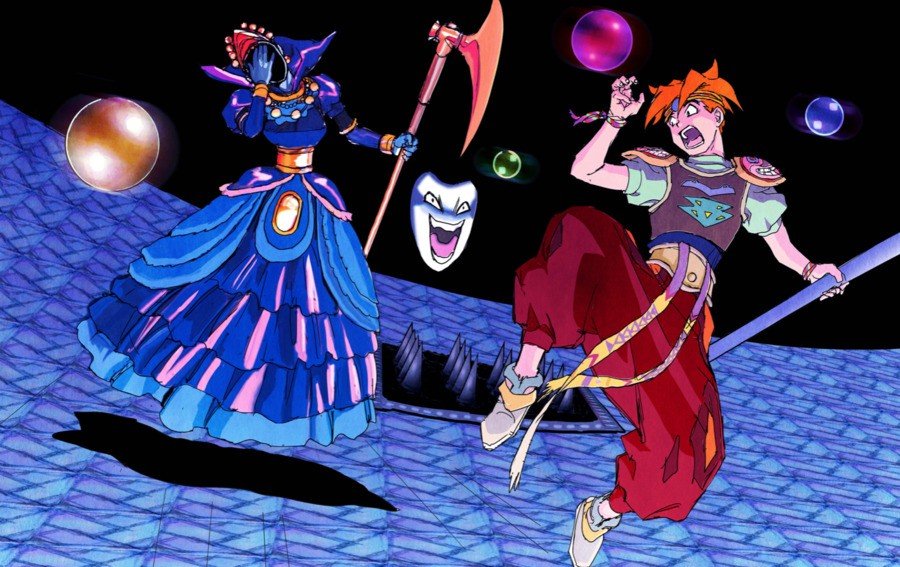 Over the holidays we’re republishing some of our best features, interviews, opinion pieces and talking points from the previous 12 months from staff and contributors alike — articles that we feel represent our best of 2021. In them you’ll find our usual mix of thoughtfulness, frivolity, retro expertise, gaming nostalgia, and — of course — enthusiasm for all things Nintendo. Enjoy!

Terranigma is a SNES title that holds a special place in the heart of many an RPG fan, which is remarkable when you consider that it was only released in Japan and Europe, and bypassed North America entirely. Part of Quintet’s loose RPG trilogy (which also includes Soul Blazer and Illusion of Gaia), Terranigma has become a cult classic in modern times – so much so that fans are currently petitioning Square Enix for some form of re-release on modern systems.

Manga artist Kamui Fujiwara – author of Dragon Quest: Emblem of Roto the genius behind Terranigma’s character design – has recently been participating in the “Hero Resurrection Festival” (or “Heroes Easter”), an online event held every year by Terranigma fans on Twitter. He has been tweeting a new artwork every day to promote the Terranigma-themed art exhibition he will hold from 3rd to 13th of September at ACG_Labo. For the occasion, Miyoko Takaoka (maiden name Kobayashi, Terranigma’s composer) is also creating a brand-new song.

Prior to these events taking place, Italian game developer and Terranigma super-fan @b_layDEV was fortunate enough to speak with Fujiwara-san about the game, and you can find the exclusive interview below.

Do you remember how did you get firstly approached to work on Terranigma?

Fujiwara: Terranigma was distributed by ENIX (now Square Enix). At the time, ENIX was publishing the manga (Dragon Quest) “Emblem of Roto”, so it was easy for Quintet to contact me for the job. It wasn’t a job I wanted, but I enjoyed working on it. Above all, I love action RPGs.

Which guidelines did you follow when creating the art for the game?

Following after Soul Blazer and Illusion of Gaia, we had Terranigma as “a third game”. I was told they wanted a change from the previous two games’ visuals, so there were no particular restrictions on the character design. In fact, I had a lot of freedom [in] how I designed the characters. I was free to design anything I wanted.

Which Terranigma character do you like the most? How did you come up with its design?

I didn’t have any particular preference about the characters. I designed them before I played the game. It’s only when you play the game that you get emotionally involved with the characters. After playing the game, I liked Meilin a lot. I think the complex way she expresses her emotions is really good. The main character was the only one I had to redraw many times, but the rest of the characters were done rather smoothly.

How much were you involved with the game mechanics and story development?

I wasn’t able to work on the game for very long because I was working on a manga series. I was involved from the early stages. Overall, I provided the visuals that served as the framework of the project. After the release of the game, my [design note] material for Terranigma was published at the end of the illustration book Dragon Quest Retsuden: Roto no Monshō – Kamui Fujiwara Illustration Collection II.

Did you get to try and play the game a lot before its official release? If yes, do you know about any major content that got cut out during the development from the initial planning to the final game?

I played the game once before it was released. It was almost finished, but there was still a debug mode, so I remember being able to warp around and explore different locations (through the closet at the beginning of the game).

There’s data in the game that hints towards a third battle phase for the final boss (Dark Gaia). Did you know about it?

[Later, Mr. Fujiwara was able to recover and publish the original (lost) Design Note of the game. In this document, we can see some never-seen-before sketches showing some discarded ideas for the final boss fight. You can also notice how one Dark Gaia discarded form got recycled to create another boss in the final release (Stormkeeper).

We translated the notes from the sketches: the first one says that in that battle phase, Dark Gaia was supposed to be an overlay of three identical sprites of the boss, with three different % of transparency. Each pair of arms moves/attacks independently.

The second one says that, if you tried to go behind the boss, he would have smashed the columns.]

Collectors are looking for the early version (beta) of Terranigma. Do you think is still possible to find it somewhere?

I think I have it. I don’t know if it’s still functional though.

[At a later time, we examined Mr. Fujiwara’s copy of the game and we were able to confirm that it’s not the infamous beta version of the game. Instead, we discovered it’s an unpublished pre-release version of the game, almost 1:1 of the final release, besides 4 bytes. The sticker on the cartridge says “513027 No. 180”, with “180” probably being the build number. The team kept publishing beta footages till 8th September (Family Computer Magazine Sep. 8, 1995 No.18) so, probably, the cartridge is dated after that.

When we said to Mr. Fujiwara that his copy wasn’t the beta, he replied with something very inspiring:

I’m sorry to hear that. But I’m glad I found out about it. It means the quest is not over, right? It’s nice to be able to keep moving forward.

We also found out that Family Computer Magazine published a monthly preview about the game starting June 1995 till November 1995. Those magazines are now collectors material. This way we were able to track down the source of the beta photos that have been circulating around the Web in the latest years: those are taken from Family Computer Magazine June 2, 1995 No.11, the beta footages known to date. Mr. Fujiwara says the beta is still out there waiting to be found.]

Are you still in touch with any members of the original team at Quintet?

I don’t know about Quintet, but I contacted the scenario writer and the composer (from the game) once on Twitter. I don’t know about the director, Mr. Tomoyoshi Miyazaki, because he seems to have disappeared. Probably, the reason why the game has not been remade nor got subsequently sold is because Mr. Miyazaki cannot be contacted.

Were you somehow involved as a supervisor for the manga and novel art production?

I provided my [design note] material to the person who drew the manga. For the novel, I provided the illustrations. I remember that the cover of the book of [Dragon Quest] “Emblem of Roto” was horizontal, so I “dared” to use a horizontal illustration for the novel.

People are trying to gather every Terranigma-related item to preserve it. In your last tweet, we can see Ark with blue hair from a page named “secret Collection No. III”. Can you tell me more about this document?

That’s a printing layout for a trading card I’ve recently made for myself. It was not commercially available at the time [of the game release].

It was not commercially available at the moment and it will not be in the future. It’s named “No. III”, but it’s actually one of 48 cards. The content on the cards are designs from my previous works. The reason why I named it “Secret” is because it’s not going to be a [public] artbook.

Do you own any unpublished Terranigma art or content?

Of course there are still some sketches and some unpublished content. Also, due to the loss of the original manuscript, some of the illustrations (sketches and finished ones, etc.) have been lost.

Would you like to work on a Terranigma remake/reboot? What would you change about Ark’s design? How would you draw him nowadays?

Of course, I am in favour of remaking the game. I think that with today’s technology, [Ark’s] hair could be represented with its original blue colour, and I would like to do that. Blue is a symbol, it’s the colour of the Earth incarnation.

Last question. Is there anything else you would like to say and share for all the Terranigma fans around the world?

It’s a game that has been loved for such a long time. I’m sure it will be revived at some point, as I’m sure that many other people think it will. If a remake does happen, I’d like to hear Ark speak to the fans, not me. “I’ve kept you waiting! You’ve waited long enough!” I’m looking forward to any new take [on Terranigma] that will lead to new emotions.