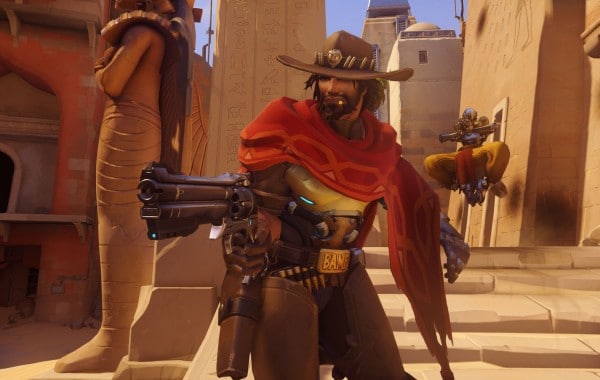 Out With The Old, in With The New

If you’re at all familiar with the ongoing legal issues faced by Activision-Blizzard, you don’t need me to explain why this change was so important. Jesse McCree was named after a prominent figure on Blizzard’s team, one that was implicated in some particularly heinous acts. McCree’s character was meant to honor that man’s contributions to Blizzard games, but honoring someone like that has turned into a PR nightmare – and as such, something had to change. Cole Cassidy was the name chosen to represent McCree’s image going forward.

As you may expect, Cole’s introduction was more extensive than a simple name swap. Many players were surprised to see just how deeply ingrained the changes were, right down to in-game sprays. Lines of dialogue were re-recorded too, this change runs as deep as it possibly can. And now, those changes are live on Overwatch’s servers.

The reactions from fans have been mostly positive – while all agree that this change was probably needed, not everyone has gotten used to the name. Upon seeing the character’s last-name-only icon on the in-game character select screen, one user said: “Looks weird. I mean I like the name Cole Cassidy, but Cassidy on it’s own looks somewhat weird…” Many feel as though “Cassidy” feels too feminine for a character as overtly masculine as Cole.

Another user had the complete opposite opinion: “I do like the last name Cassidy. It’s a common name in many westerns. Cole on the other hand? Idk. It’s kinda lame.”

Overall, a change like this will probably take some getting used to – no matter where you stand. Character names tend to be “sticky”, people feel an almost instinctual urge to use the term they’re familiar with. Anyone who’s had to change their name or pronouns in a real-world setting can probably attest to this. But regardless, the name is here to stay. The changes were made, and now the name “Cole Cassidy” is as deeply-ingrained into Overwatch as the original name. Blizzard put in the work, and they’re probably not interested in going through that process a second time. Only time will tell if this name is as “catchy” as the original.