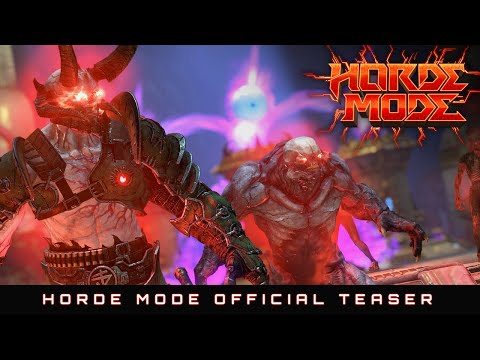 Update 6.66 (geddit?) for Doom Eternal will be released next week on 26th October, adding the new arcade-style Horde Mode to the game, and more.

id Software say this is their biggest update for the game yet, with the new Horde Mode coming alongside, Battlemode 2.0, which adds a new arena and streak-based rewards, two new Master Levels and some other new content that’s yet to be revealed.

Horde Mode is the makeweight replacement mode for Doom Eternal after id Software admitted defeat and cancelled the Invasion Mode that was originally planned for the game. Invasion would have let players invade the campaign playthroughs of other players, with id Software confirming a couple months later that it was coming at the expense of the niche SnapMap level creation feature from 2016’s Doom. Similarly, the straight up PvP deathmatches of Doom 2016 were replaced by the asymmetrical Battlemode, with player-controlled demons facing off against a Doom Marine player.

However, when Doom Eternal’s release was pushed back to March 2020, Invasion was bumped from being a launch feature to a post-launch feature, and eventually cancelled outright. Considering that campaign player numbers would have diminished dramatically by the time they got around to it, it makes sense to cook up a mode that can be enjoyed regardless of playerbase.

Despite that shift of focus, it can’t be said that id Software hasn’t delivered plenty of updates and content for the game. There have been two major story expansions – The Ancient Gods Part One and The Ancient Gods Part Two – which brought the Doom Slayer’s story to a conclusion. They have also added a number of new maps to Battlemode, with a new map and a number of new features set to be revealed at QuakeCon in August. Lastly, there has been the free upgrade to the game on PlayStation 5 and Xbox Series X|S, adding new performance modes and visual settings including full ray-traced reflections – ray tracing has also been added to the game on PC.

We awarded a stunning 10/10 in our Doom Eternal review, with Miguel saying:

“Doom Eternal doesn’t just set the bar, it breaks it. Many of the best games of the FPS genre do what has already been done, and can do it really, really well, but Doom Eternal does what no other game has done before, crafting a fast-paced power fantasy that sets your brain cells on fire. It’s an addictive exploration of the mythic Doomslayer character that delivers hours of blood-drenched fun, dozens of memorable collectibles, and a fan-pleasing story book-ended with gorgeous worlds and unforgettable music. Doom Eternal is a ripping, tearing masterpiece.”