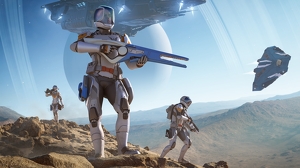 Developer Frontier has offered a brisk look at Elite Dangerous’ new genetic-sample-snaffling Exobiology feature, set to be introduced in the space sim’s upcoming Odyssey expansion and available now for those in the current expansion alpha.

Given that players will have the option to hop out of their ships and stroll around on-foot in Odyssey, Elite dangerous’ planetary systems have received a major overhaul. As part of these changes, new geological features and pockets of life will be available for discovery by thorough explorers, which can, in turn, be scanned to generate sellable data.

Frontier says it’s now quadrupled the number of vegetation species in Elite Dangerous as part of its planetary overhaul, and those players interested in making a profit from the organic life they encounter will first need to acquire a Supratech Artemis Suit – purchasable from all good space stores – granting access to the new Genetic Sampler.